Batman and Robin #32 - The Hunt for Robin: Dark of the Son

Batman and Frankenstein catch up with Ra’s al Ghul to try to reclaim the body of Damian.

This is the moment we’ve been waiting for. We’re still feeling the pain of Damian Wayne’s death. For Batman, not only did he lose his son, but also had to deal with the fact that Ra’s al Ghul had the bodies of Damian and Talia exhumed and stolen. Bruce went through all the stages after Damian’s death and knows that anything Ra’s has planned would only lead to horrible things.

While this sets the stage for Robin Rises, Peter Tomasi doesn’t treat this as just a prologue or lead in to the next big story. What we get is pure Batman vs. Ra’s al Ghul action. There is plenty of verbal and physical exchanges, giving us exactly what we’d expect and hope for. There’s a lot laid out here and it’s going to feel like a long wait for ROBIN RISES OMEGA.

Patrick Gleason’s art is always a joy to see in this title. He always adds a bit of emotion in the action and you get a sense of what Batman is going through. Batman can sometimes appear cold and stiff when depicted by other artists but Gleason adds a little something without compromising Batman’s brooding nature.

As much as I enjoy Gleason’s art, there were a couple times Ra’s looked a little animated. During the action his head and face took on a stretched look. When Batman makes his first move, it felt like the action suddenly jumped forward as I missed one little detail.

As intense as the fight is, there's a moment where Batman, with some help, could put an end to the situation. His main goal should be getting out with Damian's body. He's made it clear what he'd be willing to do, etc. But he keeps it personal (you can't blame him) and decides, instead, to continue fighting Ra's instead of getting away. I completely understand it's all part of the story and serves to move it to the next level but just felt a little disjointed in trying to understand Batman's full motives.

We know Batman can be obsessive and determined when it comes to certain things and finding the body of his dead son would absolutely be at the top of his list. We're finally seeing some hardcore Batman vs. Ra's al Ghul action and this is just the beginning of the upcoming Robin Rises story. Patrick Gleason delivers some intense scenes that you've likely been waiting to see for some time. It goes without saying that if you're interesting in any possible future with Damian or a possible other Robin, you won't want to miss this. 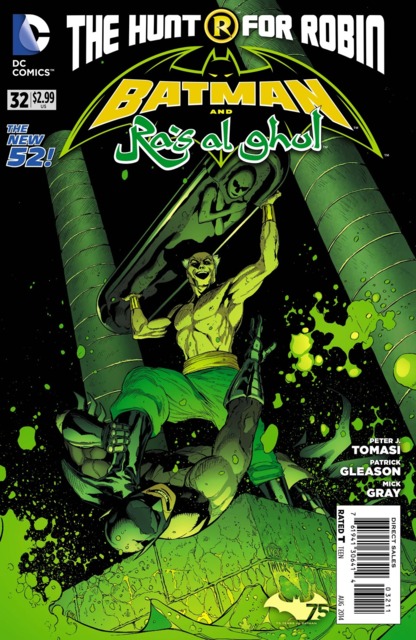