Batman is still dealing with his recent loss. Is there anything Nightwing can do to bring him out of this funk?

Peter Tomasi knows how to pull at our heartstrings. He has given us some great issues showing the building relationship between Bruce and Damian. Bruce has undergone loss before but this is proving to be an extremely hard time in his life.

With the latest chapter dealing with the different stages of grief, the big question is, will Bruce ever be able to handle "Acceptance." We know how obsessed he can be and, through special means, he is able to go over the key events. It is heartbreaking. Dick and Alfred are practically at a loss as to what they can do. That's what makes this enjoyable. It's not your typical Batman story where he beats up the bad guys. We're seeing him actually trying to deal with his loss.

Patrick Gleason always manages to squeeze in all sorts of emotion into his art. It's also great seeing his take on the story as there are some "flashbacks" to the BATMAN INCORPORATED issue.

Why and how is Nightwing here? Isn't he busy in Chicago? We could easily put that aside and assume this happens before or after his Chicago adventure. Unfortunately it's mentioned he "just came in from Chicago." I'm sorry but that just doesn't flow with what is happening in NIGHTWING. Dick can't even properly repair rips in his costume while in Chicago and can barely afford a place to stay yet he's able to make a quick trip back to Gotham for this story.

This has been an important arc but parts of this just felt a little repetitive, and not for the obvious reason. Perhaps the five stages over five months was a bit much?

There's nothing harder than witnessing someone dealing with grief and loss. Peter Tomasi has been delivering such heartbreaking stories involving Batman and the death of Damian. Tomasi knows how to throw the curve balls at us (just wait for the ending here). Patrick Gleason's art fully captures the essence of it all as well. Nightwing's appearance makes sense in terms of his connection to Bruce but it's unfortunate that it feels so forced, given the recent events in his title and mention of them. Now that the stages are over, we'll have to wait and see what's next. The Villains Month issue takes over in September and we'll be eagerly awaiting what's to come. (Hint, it included Two-Face). 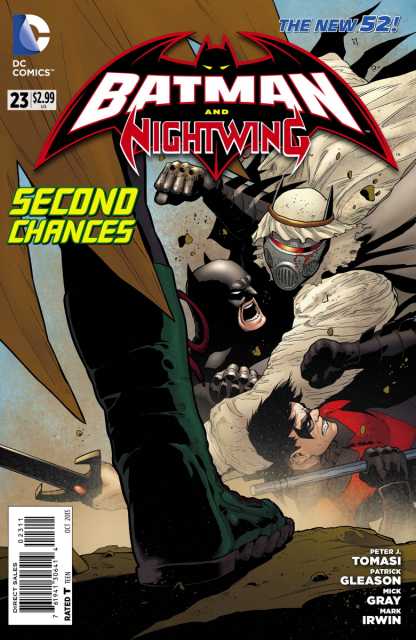