Think you know what Batman comics are all about? Get ready to a trip with a different kind of Batman.

BATMAN '66 is finally here. Inspired by the Adam West/Burt Ward television series, Jeff Parker manages to capture the vibe of the series without making it fully obvious of the time period. Seeing Bruce Wayne and Dick Grayson out in the daylight instantly lets the reader know this is a different sort of Batman story. With the Riddler committing a crime during the day, it's clear we can sit back and enjoy the show.

With the wackiness of the television series, Parker and artist Jonathan Case are allowed to take the action in different directions. Batman and Robin are in the classic Batmobile chasing the Riddler who is in a bi-plane. That's not something you're going to see in a typical Batman comic. Case also does the colors which adds to the groovy atmosphere needed for the story.

BATMAN 66 is, simply put, a fun comic. There are times when that is crucial. Too often comics can get too dark and dreary. It's great to have a comic with crazy action available. The new format used in the digital comic adds more fluidity to the story and pulls you into the story even more. (It's basically the layered format used in the Marvel INFINITE COMICS or some on the Thrillbent comics).

You need to make sure you're using the guided viewing option when reading this digitally in order to get the layers to kick in. Otherwise you'll get the same page with minor differences or word balloons added.

Readers not familiar with the Adam West show might not get the vibe being established. That would be unfortunate.

We do get some big action. Seeing Adam West/Batman gliding in the air with his cape felt a little out of place from the type of action in the show. Granted this doesn't have to be absolutely along the same lines and definitely shouldn't but it pulled me out a tiny bit when trying to think how this would have played on on the small screen.

Have you ever watched the Adam West Batman TV show? If so, you absolutely need to read this comic. Jeff Parker and Jonathan Case succeed on capturing the spirit and essence of the show. They deliver a fun comic filled with great art, story and action. If you're not familiar with the show, you can absolutely still enjoy the comic. You might scratch your head a little but you will still dig it. It's comics like this that make the Digital First comics a success. You get instant fun and excitement. Just make sure you use the guided viewing option. 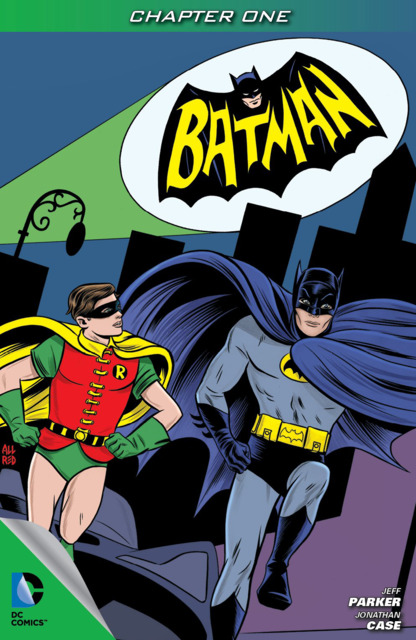