Scott Snyder and Greg Capullo deliver a perfect ending to their five-year run.

Note: We'll have an interview with Snyder and Capullo later today, discussing their final issue and what's next.

The moment we've been dreading has arrived. Scott Snyder and Greg Capullo have given us some great stories since the New 52 started. We found out back in October that Capullo would be leaving, and shortly after, Snyder revealed his plans to depart the book as well. Superheavy wrapped up last issue, but the two still had one more story to deliver. It's a slight departure from what we've come to expect, and that's a great thing.

Over the years, we've seen Bruce go through some changes. A lot of those occurred in the last couple arcs. With Bruce's departure and return during Superheavy, Snyder and Capullo are ready to dim the lights and also set the stage for the next chapter. We're used to getting big and heavy action-packed stories. This issue does a little house keeping for Bruce's life, and it also gives the perfect opportunity to reflect on what's happened and what's coming up.

You would think after the intense finale of Superheavy, Bruce could use some time off. That isn't the case as he happily dives back into the heart of Gotham. Snyder's exploration on the theme of what Gotham is, is fascinating. Snyder's run has been nearly all about big story arcs. It's thrilling to see a self contained story explore Bruce and Gotham. Even though it's a single-issue story, there's a lot going on. Snyder may be departing this series but he will return to Gotham in the upcoming ALL-STAR BATMAN. There's a few different seeds being planted here (which is something brought up in our upcoming interview).

Capullo's art, as always, is amazing. With Danny Miki's inks and FCO Plascencia's colors, the pages are a visual treat to behold. We are taken to different locations in Gotham and get to see several characters. We get a good sense of what the city is about. Usually we're focused on one area or certain characters. This issue shows there's always something going on, on or below the surface.

BATMAN #51 is the perfect ending to Scott Snyder and Greg Capullo's run. There's a bittersweet feeling as you enjoy the issue, knowing it will all be over soon. The issue does help celebrate past five years, and that's a key thing to keep in mind. Nothing lasts forever, and we've had a helluva ride for fifty-one issues. At the same time, there's a feeling of new beginnings. Exploring what Gotham is and seeing various characters planning their next schemes reassures us the city's story is far from over. We owe the creative team a huge thanks for all the great times and issues they've given us. It will be exciting to see what they'll all give us next. 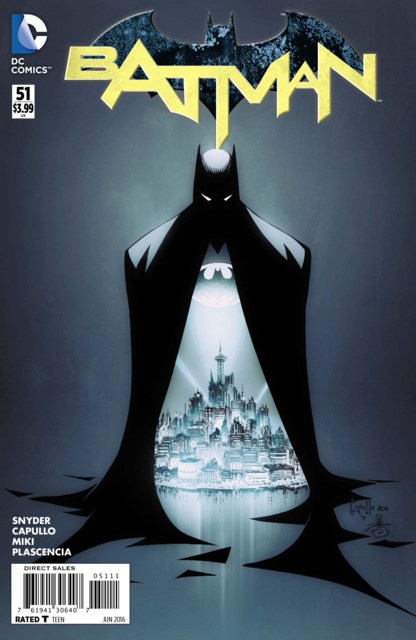