Gordon continues his battle against Mr. Bloom. Plus, what is Bruce Wayne up to now?

Note: Scott Snyder and Greg Capullo discuss this issue and the ending HERE.

Superheavy definitely takes a leap this month. Like pretty much everyone else, I want Bruce Wayne to return as Batman. Still, there's no denying that Jim Gordon as Batman is continuing to get more and more interesting. Mr. Bloom is a freaky villain and he's really putting Jim to the test. There's an interesting dynamic with how Jim handles things, including his robot suit, Rookie.

Scott Snyder is also fleshing out other characters in Gotham. We're seeing more from Duke Thomas. He may have a starring role in WE ARE ROBIN but seeing him here has been fantastic. He's slowly become a crucial part of the title in moving things forward for what we're assuming will happen at the end of the arc. He gets a chance to lay things out and it's a great scene.

This leads to Bruce Wayne. At first when he appeared on a park bench with no memories of his previous life, it felt a little too easy. Seeing it explored more, we're really getting to see what Bruce Wayne's life would have been like if he was given a second chance. It's been fascinating and you can't help but feel there's still something under the surface.

Greg Capullo, Danny Miki, and FCO Plascencia continue to rock this book. There's basically three different parts to the story with Jim vs Bloom, Duke Thomas searching for his parents, and Bruce Wayne trying to figure things out. The pages flow nicely from one to the next regardless if we have a page full of action or two characters having a conversation. The final page reveal was as stunning as you could hope it'd be.

Superheavy still has a few issues left but you can feel it all building towards an explosive ending. Scott Snyder and Greg Capullo have made me a fan of Jim Gordon as Batman. Along with Jim, we're really seeing Duke Thomas fleshed out into a great character and you can't help but be intrigued as Bruce Wayne tries to figure out what's going on. The creative team on this continues to maintain its hot streak. You'll find yourself glued to each page and cringe at the thought of having to wait to read the next part. 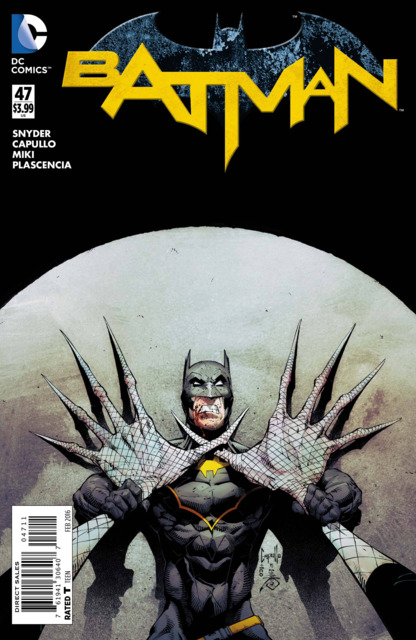