Mr. Bloom continues his creepy attack as Duke Thomas starts doing some serious investigating on his own. Also, Bruce Wayne takes a shower.

Who is Mr. Bloom? What does he want with Gotham City? These are some of the questions we're seeing in the Superheavy arc. Mr. Bloom is shaping up to be quite the villain. His creep factor has increased courtesy of Greg Capullo's depiction of him in action. With his dialogue and way he addresses several of Gotham's elite, you would think Scott Snyder was simply taking a long existing Batman villain and giving him a little update. It's great to see new characters and villains added every once in a while to give a series with so much history. Jim Gordon is really getting the chance to prove himself worthy of the Batman mantle by operating outside the big robo-suit.

To keep the book from completely feeling like a different book, we do still get updates on Bruce Wayne and his new life with Julie Madison. We discover a little bit about her and her past connection to Bruce. At the same time, Duke Thomas is off on his own. Having his start in this series as well as developing over in WE ARE ROBIN, we're seeing just how resourceful he can be. With this focus on him and the different 'future visions' we've seen with him, you have to wonder if he'll have an even bigger role in coming issues.

Along with Capullo's amazing pencils and Danny Miki's inks, we have some spectacular colors by FCO Plascencia, as usual. It's such a treat for our eyes seeing the stark contrast in the different scenes. Whether it's the creepy moments with Mr. Bloom or the bright moment in Bruce and Julie's shower or Duke Thomas' venture into the Iceberg Lounge, there's such a range in the color palette and you have to pause to admire it all.

While the different parts of the story are deeply interesting, we can't help but still long for Bruce's return as Batman. Jim is giving us a great alternative to Batman's long running crime fighting career. There are times I kind of feel like I'm waiting for the other shoe to drop concerning Mr. Bloom's motives or for something explosive to happen with Bruce and Julie. Despite this, I am digging the chance to see this story told.

The seeds of the Mr. Bloom story arc continue to be planted. Seeing him in action is the stuff of nightmares. Jim Gordon, as Batman, is definitely going to have his hands full. Seeing the further adventures of Duke Thomas as well as Bruce Wayne in his new life adds to the mystery of the arc. Scott Snyder and Greg Capullo have been shaking things up and there's no telling what they'll throw at us next. 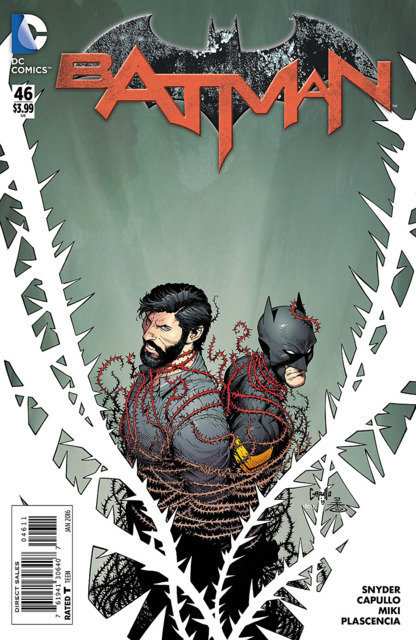