At first glance, you might think to yourself that you're reading a simple fill-in issue of BATMAN. We've been neck deep in Scott Snyder and Greg Capullo's Superheavy story arc with a new Batman going up against a new villain known as Mr. Bloom. Once you start reading the issue, you'll discover it's so much more than a simple fill-in issue.

You'll immediately notice the amazing artwork by Jock. Jock has recently been collaborating with Snyder on WYTCHES. With this story taking place in the past, there's a really great Black Mirror vibe going on (despite it being Bruce under the cowl and not Dick Grayson). Having Brian Azzarello on board as well just pushes this over the top.

Going back to an early point in Batman's career, we get to see that younger and more arrogant version. The only problem for Bruce is the crime he finds himself investigating. You could say it's 'ripped from the headlines' but Synder and Azzarello do it justice. When a teenage kid is shot and left for dead, it's a horrific situation that really brings the story closer to home. Because of Batman's attitude, he thinks he can immediately solve the case. The story is heavy, gritty, and suspenseful. You can see how focused Batman is. This is Batman the crimefighter. This is Batman the detective. This is Batman, the hero of Gotham, trying to fight the evil in the dark corners.

Adding to the story and Jock's art, we get the amazing colors by Lee Loughridge. It may not necessarily be a creepy story but you'll definitely get chills when you see the vibe going on here.

BATMAN #44 is the comic you didn't realize you wanted. No one digs when we have a fill-in issue interrupted a story arc. Scott Snyder takes the idea of a fill-in to a whole new level. Joined by Brian Azzarello, Jock, and Lee Loughridge, BATMAN #44 is a superb stand alone issue which actually does tie into the current Superheavy story arc. If you've been missing Bruce as Batman and the early detective days, you just can't miss this issue. The story is heavy and will give you a slight punch in the gut but you'll love every minute of it. 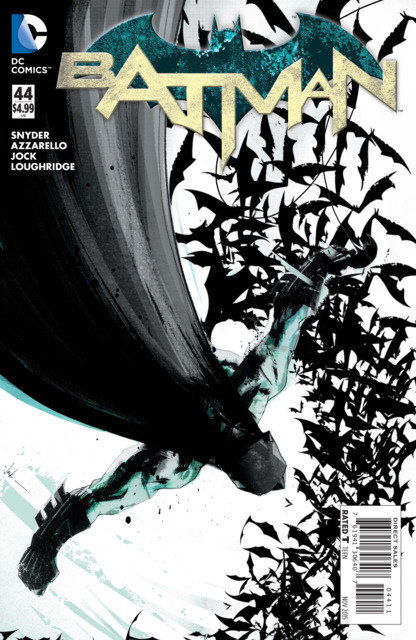