We have a new Batman in Gotham City so why not a deadly new villain as well? And what’s the deal with the old Batman?

From the very first page, we get an idea who, or what, Mr. Bloom, the newest threat in Gotham City, is all about. Greg Capullo and Danny Miki are tasked to draw an exotic-looking flower but with FCO Plascencia’s colors and the little details that soon come to light, we see this is a freaky-looking flower. In some ways, it’s like the birth of a new threat. It’s not often these days we truly see a brand new villain emerge within the pages of an ongoing (corporate) comic. We usually see the previous existing villains return, sometimes with a twist or variation. Scott Snyder and Capullo seem to have no problem adding a new character to Batman’s Rogues Gallery. It’s fitting in some ways. A “new” Batman should have “new” villains.

The big twist from the previous issues was the revelation that Bruce Wayne is indeed still alive. With Jim Gordon seeking him out for assistance, it raises some interesting questions. The main one, what the heck has he been up to? Slowly, throughout the issue, we discover the reason for Bruce Wayne’s new role in Gotham City and why he is not trying to reclaim his role as Batman. It throws a pretty big wrench into the system for those hoping or assuming Bruce would return as Batman immediately. Snyder is definitely making the sudden revelation of his appearance and status quo not quite what we would expect. Just because he’s definitely around doesn’t mean we can just assume he’ll fully be back right away.

Snyder also plays around with the abilities and operating techniques for the new Batman. It’s not really a huge spoiler but we actually don’t even see the robo-Bat suit in this issue. Batman has to operate through different means and finds himself up against Bloom’s men. The scenes with Bloom also reveal appearances can be very deceiving as well.

Once again, we’re getting a lot of the unknown and unexpected thrown at us. It’s understandable that some readers might have difficulty accepting the current changes but Snyder and the Bat-team are showing us how it’s possible to give a new take on the character without veering too far off the path we’re familiar with. We’re still seeing a lot of the same players. Even the scene with Alfred and a certain guest star carried loads of information for us to digest. We had about forty spectacular stories with Bruce Wayne and now Snyder, Capullo, Miki, and Plascencia are taking us down a fascinating side route. I love reading this book and having no idea what might be coming up around the corner. We’re all assuming things will revert eventually but I am going to enjoy every single moment of this “new” Batman while it lasts. 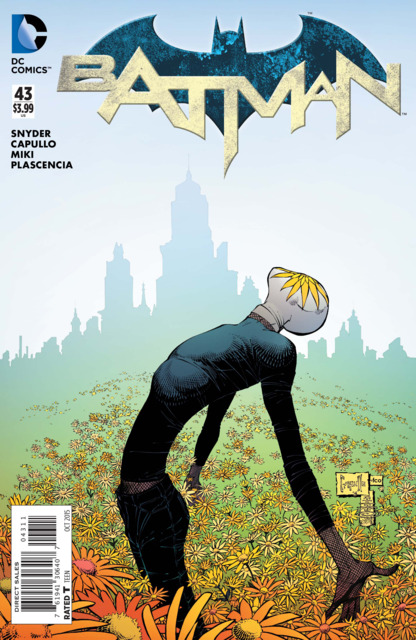