It’s a new chapter for Gotham City and Batman as we witness the birth of a a new hero.

Note: We'll have a spoiler-heavy interview with Scott and Greg today at noon PST.

Sometimes change can be a good thing. Sometimes there comes moments you take a risk or try an experiment. That’s what Scott Snyder and Greg Capullo are doing. This isn’t the Batman we used to know. That’s part of what makes turning each page exciting. We’ve pretty much always seen Gotham with Batman. The idea that it’s been months since Endgame is a strange feeling. Seeing a new threat attacking Gotham and knowing our Batman won’t be showing up is weird.

When we see Batman here, it almost feels both familiar and different. As you read Batman’s dialogue, you start to hear Bruce’s gravel voice but then you remember what you’ve heard and read in the DIVERGENCE sneak peek. This is a different Batman. He’s wearing a robot-suit. It is weird. It’s also pretty cool as you read more and more. This is our full introduction to Jim Gordon as Batman. While the action is thick, we also get some flashbacks in the months between issues to see how exactly he got to this place.

Even though we have Batman in this issue, besides the suit, it is a different Batman. This is the first time we don’t have one of Bruce’s protégés taking over the job. Gordon may have experience in the Marines and with the police department but this is a whole new game. We get to see him adjust to his new position and the new toys he gets to play with. We’re used to a Batman that has every situation figured out. Jim doesn’t have that edge but he does have his own experience and wits to allow him to get the job done in his own way. Gordon’s reasons for finally accepting the position is fascinating. Again, it brings that idea of an experiment to mind. Can a Batman that operates within the system actually work?

Greg Capullo and Danny Miki’s art is, as you’d expect, top notch. Even though we see some familiar faces like Gordon and Harvey Bullock, the action scenes almost make it like a new book for them. It’s great seeing how they handle a big giant mech suit battle in the middle of Gotham. Many have commented on the design of the suit. I wasn't 100% sure about the idea when I first heard about it. Even Gordon questioned it. But as a certain character in the issue says, “It grows on you.” Adding to it all is FCO Plascencia's colors. Some moments are almost a little reminiscent to the first arc in Zero Year. It's almost strange seeing a Batman fighting during the brighter times of the day. But the colors really jump out and amplify everything.

It's obvious this might not be a Batman for everyone. Some readers are very resistant to change. This isn't the Batman I would immediately ask for. I am, however, incredibly intrigued by the idea of Jim as Batman as well as how this different way to operate will work. I am curious to what sort of threats he'll be dealing with. It is a new-ish and different direction that will take some getting used to. But this issue makes it seem like it'll be worth it.

The reports are true. We have a new Batman that operates in a completely different fashion. It's an exciting time as Scott Snyder and Greg Capullo are almost writing a brand new book with these changes. There are still some familiar elements and we all know this can't last forever. It's a risky move and I'm incredibly fascinated to see how this turns out. If you have faith in the creative team and love the idea of Batman being taken to a different level, you'll want to pick up this issue. It's BATMAN, but it's also something new for the series. I can't wait to see how this plays out. 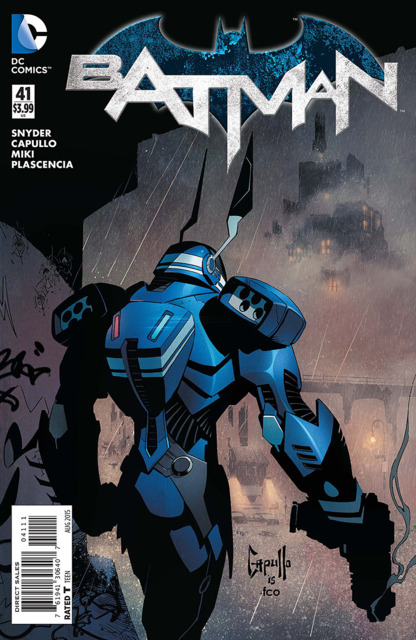