They put the “end” in Endgame for this issue. Find out the results in this epic conclusion of Batman vs. Joker.

Note: You can check out our interview with Scott and Greg about this issue and beyond HERE.

How many times have we seen Batman fight Joker? As great as the confrontations are, they usually end the same way. With Endgame, you really get a sense of something a little different. The Joker has laid all his cards out on the table. He hasn’t been holding back against Batman. The revelation of what he knows about Bruce and the secrets of himself have been just a couple of the things Batman has had to deal with. The clock is ticking and there isn’t much time left as all of Gotham City has been infected by Joker's new deadly toxin.

This is the sort of Batman story we want to read. It’s allowed to build up to an incredible level and we’ve been kept on the edge of our seats. Batman tends to make a few appearances in other titles throughout the month and it’s nice to get a story, once in a while, that is completely over the top and completely satisfying at the same time. There is a reason we don't get stories at this level all the time. But when we do, we are treated with something pretty grand.

While there is plenty of action in the story, Scott Snyder sprinkles in plenty of insight into Batman’s mind. We get an idea of what he’s going through and how prepared he is to make the ultimate sacrifice, if need be. Seeing Batman’s allies and enemies fighting side by side is something I didn’t believe could completely work. It just adds to the seriousness of Joker’s threat in this story. Snyder even gives us some nice twists during the issue to catch us off guard as Batman’s world fights to continue its existence.

All of this is enhanced by the art team. Greg Capullo and Danny MIki pure an incredible amount of energy into this big story. FCO Plascencia’s colors captures and enhances the mood and changes appropriately with each scene. As you feel the story building up to its crescendo, you’ll find yourself turning the pages at a slower pace just to take in every little detail. When it comes to the fight, it’s the confrontation we’ve been waiting for. It’s a brutal clash and you simply feel the finality of it all. This could get messy and it absolutely does. “That’ll leave a mark.” No kidding.

If you’re on the squeamish side, the fight might be a bit much. But knowing fully what the Joker is capable of and what he’s been doing, I wouldn’t expect anyone to complain over the amount of action here.

The wait since issue 39 has been difficult. Reading this issue, you can see it was definitely worth the wait.

You can’t help but wonder how the aftermath will play out. That begins in the upcoming Free Comic Book Day Issue. Hopefully normal readers won’t miss out on that issue.

We’ve seen Batman fight the Joker many many times over the years but this is the fight to end all fights. There is no holding back as Joker’s plan rushes to its ultimate fruition. Neither Batman nor Joker can afford to hold back. This is the stuff Bat-fans have been hungering for. Scott Snyder constantly sets the bar high for himself. Big things have been set up here and we get an epic conclusion, one most people might not expect. Greg Capullo, Danny Miki, and FCO Plascencia continue to deliver the glorious details and action the book demands. This isn’t a story you’ll soon forget. There are repercussions and you’ll be haunted by some of the imagery. Snyder, the creative team, and Batman and Joker don’t hold anything back. 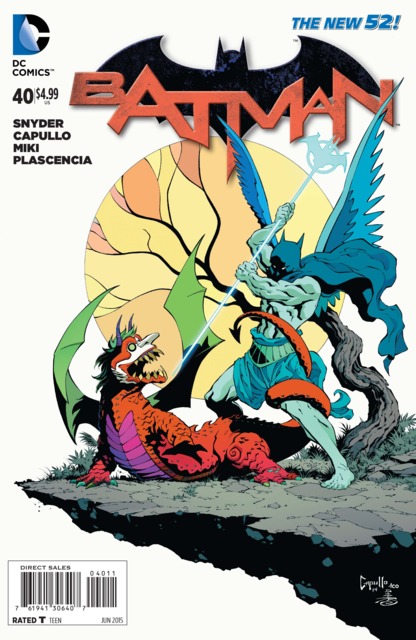