The Joker continues his attack against Batman and Gotham. Batman is forced to make some deadly allies.

Note: We have an interview with Scott Snyder HERE for some more insight.

It’s safe to say the Joker is not joking around anymore. From the end of the last issue, we’ve seen Batman is becoming a little desperate. Going to the Court of Owls to talk shows how seriously he’s taking the situation in Gotham Joker has created. The Court represents a pretty big loss for Batman but he knows he can’t just grasp onto his pride in the hopes of solving this huge problem.

There is a slight sense of despair throughout the issue. Batman fully realizes what’s at stake. While we know him as always being prepared, he’s aware he might not survive this fight in order to save his city. Getting some insight into how Bruce feels about death is a little frightening. We know he’s not the most cheerful person around but it’s almost difficult to see him go around like this.

When Joker does appear, it’s like a punch in the gut. Greg Capullo’s art combined with Danny Miki's inks and FCO Plascencia's colors makes you pause. We’ve seen some creepy depictions of Joker but this is the sort of thing you hope you never dream about. When Joker is confronted, let’s just say one character won’t be the same again. Joker has become more ruthless than ever. He’s crossing some serious lines and has no concern about earning Batman’s wrath. He’s either unconcerned or unafraid. That makes Joker even scarier. We’re seeing a new kind of savagery with Joker and it’s something readers won’t soon forget.

Just when you think you know how the story's going to go, Snyder throws another curve ball at us. Visiting the Court of Owls was one thing. There are even more questionable people he goes to.

The story jumps back and forth within a few hours from time to time. It does amp up the story but there was a couple times you weren't really sure if the events were happening "now" or before until the next scene told you it was "now."

When we do first see Joker, I was a little confused what happened to him before. (We will get some clarification in the upcoming interview).

All too often comics have an underlying feeling of being safe. The bad guys are always defeated and the good guys always win. Scott Snyder is known for beating down the beloved Batman. He puts him in situations that knock him apart so we can watch him crawl is way back to the top. We've seen many incarnations of Joker over the years but what we're seeing now is borderline disturbing. Snyder, Capullo, and the others are going all out in this arc. There's a feeling things are going to get even worse before they get better. Hopefully Batman will survive this. He has to, right? He's Batman. Don't miss this story. 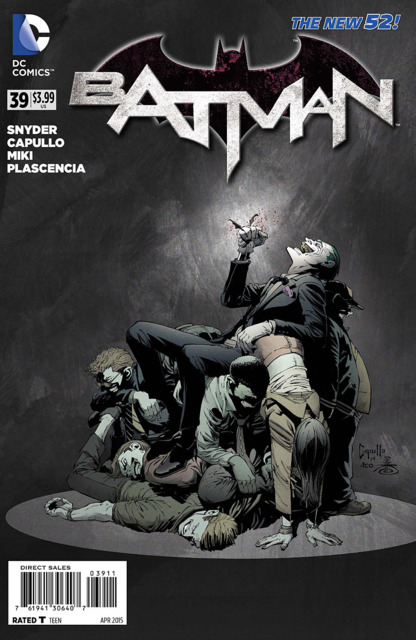