Joker has targeted Batman and all of Gotham City. Will Batman deal with what Joker now knows?

Note: We have an interview with Scott Snyder on this issue and the arc later HERE.

How many Joker stories have we read? With seventy-five years of history, we've seen a lot as well as many different versions and incarnations of the Joker. With Joker's return after Death of the Family, we're seeing that Joker wasn't just sitting around catching up on soap operas. Feeling spurned by Batman, Joker is showing his hatred and what he is capable of.

There is a deep sense of "anything goes" with this arc. Snyder has mentioned before that this is likely the last time he'll write the Joker. Joker now has an added weapon to his arsenal with a little bit of knowledge he's gained. This alone could change the dynamic between Joker and Batman. It appears Joker isn't playing that card at the moment. Along with his attack being unleashed upon Gotham, we possibly finding out that there's is way more to the Joker's story than we realized.

The art and color by Capullo, Miki, and Plascencia is fantastic, as always. There is a big change in the tone compared to Zero Year. There are some really dark moments in the story and the art and color capture the essence of those moments. Even a simple scene with Joker swimming looks incredibly disturbing.

The story even brilliantly brings in an update of a character mostly seen as a joke. Snyder may be taking some risks with what's being revealed about Joker but that just makes us stay glued to the story even more.

If the main story wasn't enough, we also get a continuation of the back up stories by James Tynion IV with art by Sam Kieth this time.

How much longer can we keep getting this big attacks against Batman and Gotham? Don't get me wrong, I absolutely love them but you almost get a little out of breath wondering how Batman is going to get out of this one. But that's why we love reading the book.

There's no letting up in the action and suspense with Endgame. Scott Snyder is not letting up with Joker's attack against Batman and Gotham City. It does indeed feel like the end is coming. Snyder is pushing the confrontation between Batman and Joker. It's hard to tell what's scarier, what Joker might do or what might become of the revelations about Joker. The art and color adds to the creepy and suspenseful mood of the story. Batman: Endgame is not a story you'll want to miss. It's already proving to be quite the game-changer. 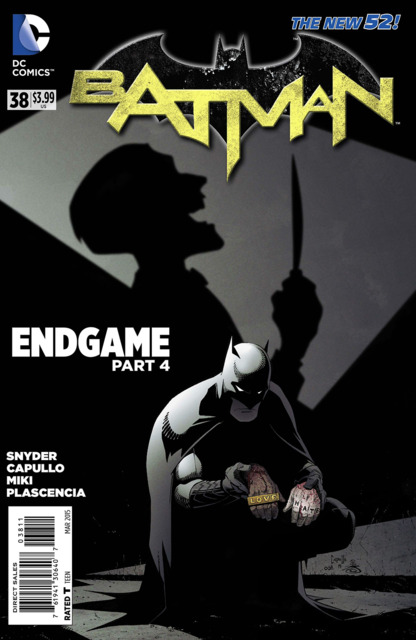