Joker’s back and he’s determined to make Batman and Gotham City suffer his wrath.

Note: We have an interview with Scott Snyder about this issue right HERE.

We can all agree that the Joker is one of the greatest villains in comics. One of the fascinating things about the character is how, when he appears, you’re too sure which version you’ll get. Because the Joker is so unbalanced, we’ve seen a variety of different levels of intensity with his personality. Last time he was in Gotham, he was professing his love for Batman and the good vs evil game they took part in. When Batman dismissed the concept, Joker wasn’t too happy. Having been absent for some time, we’re now getting an idea what he’s been up to in that time as his plan starts to unfold.

The first thing you’ll notice when you open the issue is a sense of familiarity. With this being the third part of the Endgame story, the first page is reminiscent to the first page of BATMAN #15, the third part of Death of the Family. Last issue Batman was shocked upon the discover that Joker had been under his nose for sometime. With Joker getting the upper hand, Batman became aware that Joker’s plan to unleash a deadly toxin upon the city was already underway. Batman was helpless to prevent it.

This is one area where Scott Snyder thrives. We all know the writer has deep affection for Batman but he excels at creating horrific situations that try to tear Batman down. As deadly as Joker can be, Batman has fought him so many times and that’s made him believe he’ll always be able to stop him the next time. Because Joker’s had some time to do some fine tuning to his toxin, Batman might not be quite as prepared this time as he would like. On top of this, we’re getting the impression there might be more to Joker than we all thought. Of course when it comes to the Joker, you should never believe what he says or implies. This time does feel a little different though. Snyder delivers some more extremely creepy moments with Joker. This isn’t a laughing clown we’re seeing. This is the stuff of nightmares. The implications of what Jim Gordon may have discovered is something to think about.

Greg Capullo, along with Danny Miki and FCO Plascencia deliver the visuals to make this another great installment. It’s fascinating how many aspects of the previous Zero Year arc were so bright and vivid and now we’re back in the dark. The pencils and inks simply look so crisp and clean. With the hard colors jumping off the page, you’ll just want to stop and stare. Seeing a creepy Jokerized Gotham citizen peeking through the window really stands out. A later moment with Batman making a discovery brings some of the colors from the previous arc back to give us a scene with a trippy feel.

Let's not forget the backup by James Tynion IV and John McCrea. We have to take the information here with a grain of salt but it's starting to make you wonder.

There’s some big implications involving Joker. Snyder is seemingly taking him to another level. There’s a couple things that could change as a result. Obviously we have to wait and should wait until the story is over to see how it all plays out. Also the answer to one of the questions from Death of the Family answered here changes things as well.

Joker is back and he's done with the jokes. We've seen Scott Snyder and Greg Capullo give us a Joker story before but now, Joker is back with a vengeance. The stakes have been raised. Gotham City has been infected and Batman is struggling to keep up with Joker's plan. With some new developments on Joker, things are about to get even worse. Scott Snyder has said he's writing this as if it was his last Joker story and you can tell. If you thought you'd seen all the Joker stories there were to tell, you haven't seen this one. 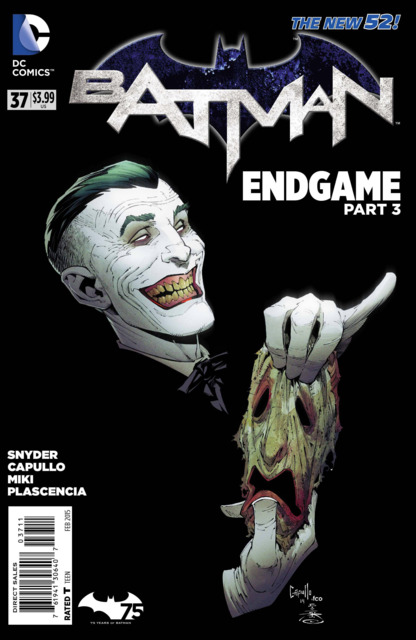