Endgame continues. Batman has to survive fighting a Joker-ized Superman in order to find out the truth behind Joker's return.

Scott Snyder and Greg Capullo are reminding us what comic books are all about. Last issue we saw the Justice League attack Batman. The revelation at the end that Joker was somehow involved set it off in a different direction. This issue slams down the action with Batman vs. Superman. We don't often get to actually see stories and scenes like this. Superman may not be 100% in his right mind but we got a pretty glorious battle.

Greg Capullo continues to amaze us month after month. You could almost feel the punches being thrown (thankfully we couldn't actually) and I loved the panels where the perspective is pulled back so we get an even better sense of the size and scope of the fight. You also have to stop and stare at the panel showing an image of Joker from Death of the Family. Talk about creepy.

Speaking of Joker, Snyder reveals how Joker came back (sort of) as well as what he's been doing since. The fact that Joker's actually been around for some time and none of us, Batman included, knew is just a testament to how freaky of a character he is. Joker has cranked up his game and each issue makes you hunger for more.

Joker is becoming more and more of a threat. I know I shouldn't worry about it but I can't help but wonder how can his inevitable next appearance after this top this? Joker has become a new force to be reckoned with.

I would say, even if you just 'like' Batman or Joker, you won't want to miss this issue. You can see and feel the enthusiasm and fun Snyder and Capullo are having on this story. Joker is back in Batman's life and Snyder is out to make sure the action and storytelling are cranked up higher than ever before. We often feel sorry for Batman when Snyder puts him through the wringer. Snyder and Capullo have been consistently delivering great and solid Batman stories. I can't help but be eager for the next issue. This story is pretty nuts and I'm having a blast reading it.

(You can read an interview with Snyder on the issue HERE). 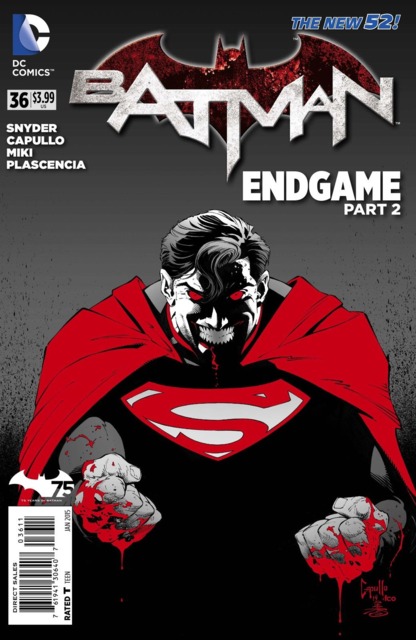