Endgame begins here. Is this the beginning of the end?

This is an issue you'll want to read before you find out what the hook is. In a surprising fashion, we managed to go months without knowing what Endgame was about or who would be in it. It's rare to go into a comic these days and not have a full idea of what is going on. As we see Gotham City attacked by some unknown force, Batman is shown all armored up and ready to fight.

After a year long absence from the present, as we explored Batman's early days in Zero Year, it's interesting being back in the present. Actually, as with issue #34, this story takes place after the events of BATMAN ETERNAL. We're still seeing some of the after affects and repercussions. Bruce and some allies haven't come out of it completely unscathed. With this glimpse into the current events, it's almost a strange new status quo being show. Until the action kicks in. When it kicks in, it kicks really hard.

Another nice change of pace is seeing characters we haven't seen within these pages before. It's like a wish list being fulfilled getting to see Greg Capullo and Danny Miki work on these characters. We're getting some daylight action, as we saw in some parts of Zero Year, as well. I'm always fascinated by how easily such brightly colored Batman stories (by FCO Plascencia) can feel so natural. We're used to the Dark Knight being a creature of the night.

While it's easy to see this issue as a fanboy's wish come true, there is a much deeper story beneath the surface. You'll sit back and enjoy seeing everything play out. When everything is revealed, it's pretty cool.

The back up is pretty amazing as well. The story is by James Tynion IV and focuses on an aspect of the main story. What is kind of mind-blowing is seeing Kelley Jones' art here.

The main story is something I've wanted to see on two different levels. I can't really complain about anything except there's the depiction of a Green Lantern on the cover which doesn't take place in the comic. Not a big deal.

DC Comics and Scott Snyder have managed to keep the focus of Endgame a secret for months. It's rare to be able to read a comic with a big shocking twist and not have any elements of it leaked out before you get a chance to read. Snyder and Capullo are setting up a pretty big story, even if it's only a six-issue arc. For a 'part one' issue, there's a lot going on. It's crammed with action that should bring a smile to any Bat-fan's face. The reveal at the end will make your smile grow even more. If the main story wasn't enough, we get a back up written by James Tynion IV with art by the legendary Kelley Jones. Just when you think Scott Snyder and the rest of Team Batman couldn't top the previous story they gave us, they manage to blow us away all over again. 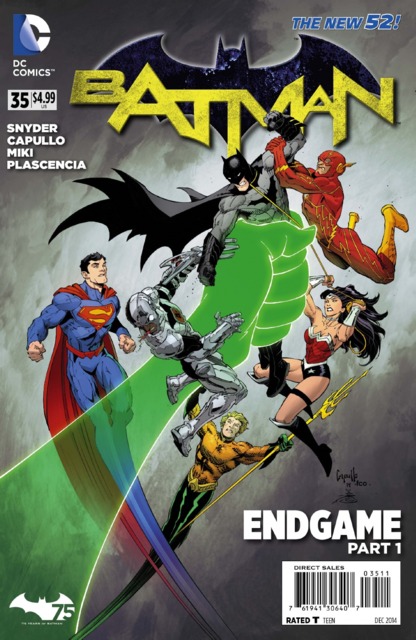