There's a killer on the loose and no one has noticed...except Batman.

Zero Year is over and it's a return to the present. Sort of. Scott Snyder and Gerry Duggan are actually bringing the Dark Knight forward a little to right after the events of BATMAN ETERNAL. The story is by the two creators with Duggan doing the writing for this issue. As much as I loved Zero Year and will miss that time period considerably, there is something nice about seeing our familiar Batman on the hunt for a deadly killer.

We've seen Batman track down criminals and killers before. This time, there's a different feeling. It might have a little to do with Matteo Scalera's gritty and detailed art. You definitely feel a different vibe going on. Batman usually goes up against the big and colorful enemies in his rogues gallery. With the Meek, we have a a small time killer on the loose. But being 'small time' doesn't make him less dangerous. It could be the fact that he's been able to operate for so long unnoticed that makes him more of a threat. Seeing this villain and this other side of Gotham, it is a refreshing change from you typical Batman story. This is exactly the type of story we need after the epic nature of Zero Year. Being able to see Batman using his skills to track down a lesser known threat reminds us what we love about Batman's character.

As for the story taking place after BATMAN ETERNAL, it's an interesting move. Granted, there aren't loads of spoilers that will prevent you from enjoying the rest of that series. In a simple two-page spread, we see little updates about where Batman will be and the fates of certain characters, such as Catwoman and Jim Gordon. If anything, it makes you look forward to how that series will play out even more. There was also a minor thing in this issue that shouldn't be overlooked.

It's always hard to go to a smaller scale or self-contained story after a big Scott Snyder arc. We get a pretty fascinating story here but having it limited to a single issue lets you know it will be resolved neatly by the end of the issue. There are some that want shorter stories while others enjoy the longer formed ones. Coming off an almost year-long arc, this is almost a bit of a shock. But it's still a story that can be enjoyed.

It's interesting to see this series go from Zero Year to the immediate future, after BATMAN ETERNAL. It makes sense to not focus on the current ETERNAL storyline time period so this story can have a separate feel but it's a little jarring to go from the past to the near future. It's not fully clear that this issue takes place in this immediate future but Snyder has mentioned this in interviews.

Batman is back in the present and is on the hunt for an unknown killer. Anytime we get to see Batman hit the streets and use his skills to track down a threat is a treat. Scott Snyder is joined by Gerry Duggan and Matteo Scalera in bringing us this story focused on a single killer. Those that have complained about the longer story arcs should rejoice in seeing Batman get to the bottom of this mystery. Scalera's art perfectly fits the story and definitely leaves us wanting more from him. Despite the story being a self-contained one, you get a sense that there is something else going on. Don't miss out on this one. 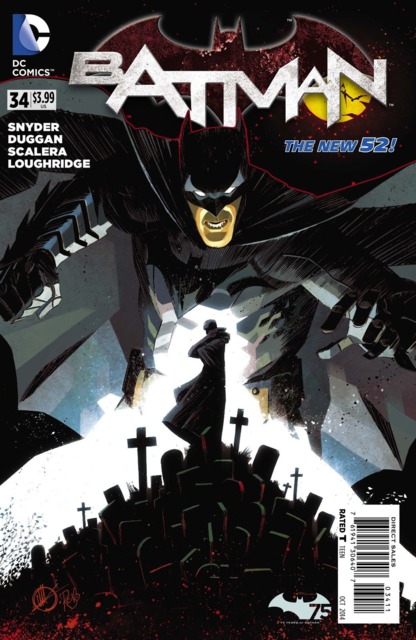