It's the end of Zero Year. Batman vs Riddler with all of Gotham at stake.

This was an issue I was both looking forward to and dreading at the same time. Zero Year has been an epic story. As I've mentioned several times, I want to know what happened in the early days of the New 52 Universe. Scott Snyder and Greg Capullo have shown us in a big way.

In Savage City, the final sub arc of Zero Year, Riddler's plan and triumph over Gotham was revealed. Batman joined up with Jim Gordon and Lucius Fox to try to reclaim the city and the final moment is here. This is where we find out if Gotham City can be reclaimed before the city is blown away by missiles from a fleet of jets.

Seeing Riddler is this fashion has been a trip. As cool as it is seeing how he rose to power, we all want to see Batman up against Riddler and his riddles. We get exactly that. Snyder goes all out and comes up with some nice riddles. The question is, will you try to solve them yourself before moving on to see what the answers are?

Of course the art team of Capullo, Danny Miki, and FCO Plascencia do an amazing job in this oversized issue. The detail, light, and colors of the battle between Batman and Riddler is brilliant. Capullo does a great job mixing up the perspective and angles, giving us a nice feel of the action and suspense as the clock is ticking for Gotham.

Of course there's more to the this final issue than Batman fighting Riddler. Throughout the arc, we've been seeing glimpses further into Bruce's past. The final pages to conclude the story are perfect. The entirety of Zero Year is a story that will live on in collected format. We've seen his origin story time and time again. This has been much more than just an origin story. This has been a story that defines who Batman is. This story is exactly what I've wanted since the New 52 began.

The only complaint I have is when Riddler says, "Riddle me this, Batman," it's off panel. The fact that this arc is over is a bummer as well.

Batman: Zero Year comes to an end. This is the sort of story that makes you want to stand up and applaud. We've seen countless Batman origin stories throughout his seventy-five years of publication but Snyder, Capullo, Miki, and Plascencia have given us the definitive one. Zero Year is going to be a great collected story you'll want to read over and over. The entire Bat creative team have outdone themselves here. If for some reason you haven't read Zero Year, you need to fix that immediately. I can't wait to read this all over again. 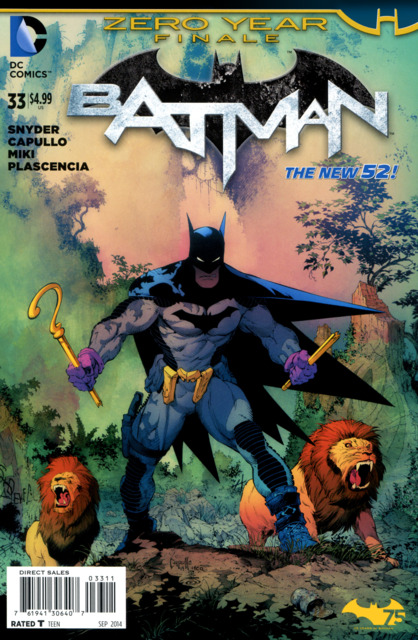