Zero Year is approaching its ending and Batman is determined to stop Riddler. Problem is, Riddler keeps staying one step ahead.

Zero Year continues to keep us captivated. This has been an incredible journey and even though the end of the story is nearly upon us, there’s no telling how exactly we’ll get there. Scott Snyder is setting up some interesting things in this story and just when you think you know the whole story of Batman’s early days, we get another flashback or piece of information that makes you wonder. What does that first page mean?!?

Seeing Batman work so closely with Jim Gordon and Lucius Fox is a blast. Batman doesn’t trust many people and it’s great seeing how they started forming this bond due to Riddler’s crazy scheme.

Speaking of Riddler, there can’t be any way someone would see his character as a joke after this. He has taken over Gotham City and keeps outsmarting Batman.

As usual, Greg Capullo’s art is solid. This is a different kind of Gotham City and it’s fascinating seeing it in this state. Danny Miki and FCO Plascencia should not be overlooked as it is this entire team of creators that make this such an incredible read.

It’s hard to believe there’s only one more issue to wrap everything up. Trying to figure out where this fits into the regular New 52 timeline, including the tenure of the different Robins and the opening of JUSTICE LEAGUE #1, is not recommended.

Zero Year, how much do I love thee? This has been a long running and fantastic story. I hate to see it end next issue. Scott Snyder, Greg Capullo, Danny Miki, and FCO Plascencia have been doing a stellar job in deliver a fantastic Batman story completely separate from everything else. With Batman, in particular, it's often difficult to see the character not pulled into other storylines and events. The showdown with the Riddler is heating up and this is yet another issue you'll want to immediately gobble up. 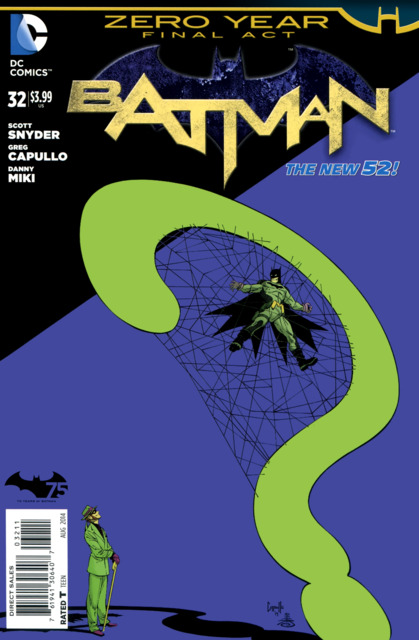