It’s time for Batman to challenge the Riddler, who has taken over Gotham City. The question is, is Batman ready?

It’s been great seeing the slow build this story has had. Along the way, we have seen so many cool things and moments. Most big comic book stories have an ambitious feeling but then suddenly end, often with a fizzle, with a feeling that it’s all being rushed. That isn’t the case with Zero Year. Granted, we’ve had two different story arcs within the main overall story. This has further allowed the story to be told the way Scott Snyder must have wanted it to be told.

With the Riddler in control of the savage Gotham City, it’s up to Batman to try to stop him. At this stage in his career, he’s not quite fully equipped to do it all on his own. There are multiple obstacles in his way and Batman is willing to seek assistance from others. Seeing their planning session adds to the overall feel of the caper they’re about to pull and it also allows Batman to lay out his plan, showing he has a solution to this problem.

As before, we get another flashback to young Bruce Wayne. Seeing the way Snyder interweaves moments from the past into this present allows us to get a glimpse into who Bruce was before he became Batman and after his parents were killed. These moments alone are full of insight and worth exploring.

Snyder also has shown the evolution of Riddler. This is a man who has all of Gotham at his mercy. As Batman prepares for this confrontation, despite the smaller scale of Batman’s arsenal and tactics, you immediately get a feeling that this is going to be pretty epic.

As always, Greg Capullo’s art, Danny Miki’s inks, and FCO Plascencia’s colors make this a treat to look at. Capullo’s character designs all have a nice solid feel to them. They all look grandiose on each page. Each crisp panel is beautifully colored even though you wouldn’t expect a Batman comic to be so colorful. It fits the story perfectly.

Nothing bad except for Bruce’s teacher in the flashback. What a jerk.

Some may feel Zero Year has been going on for too long. I couldn’t disagree more. Too often big comic stories have a rushed feeling but here, we’re getting to see all aspects of the story get built up and fleshed out. Too often Batman is shown to easily solve any problem. Getting the chance to see a younger Batman has been fascinating as we get to see the man and hero he will become. Scott Snyder’s story has kept me captivated month after month. The art team of Greg Capullo, Danny Miki, and FCO Plascencia makes everything look so dang good. I’ve wondered this before. How will they top this story next? 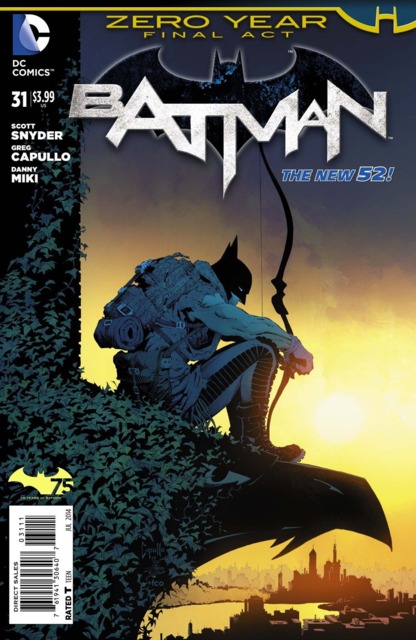