Savage City begins and you’ve never seen Gotham City quite like this. Scott Snyder and Greg Capullo continue Batman’s adventure from the beginning.

Zero Year has entered its final stage. With Savage City, we’re about to see Riddler’s crazy scheme come to fruition. Back on the first few pages of BATMAN #21, we saw an overgrown and ravaged Gotham City. Seeing Gotham transformed shows just how ambitious Riddler and Scott Snyder can be. Riddler has some big plans for the city and Snyder is continuing to tell the big Batman story that only he could tell (honestly, would DC let anyone else tell a story like this?).

Before the action begins, Snyder and Capullo deliver another flashback that takes us back before Zero Year. There’s almost something frightening about seeing Bruce in these earlier stages and it does make you want to see even more of his early days. Of course things seem to take a turn for the worse or the scenes are filled with symbolism so you have to pay close attention. As much fun as it seeing Batman’s first year as a crime fighter, we’re seeing that there is even more that happened before that and more that could be explored in the years before.

There might be the question of how exactly did Gotham get so overgrown from the previous issue. It’s all part of Snyder’s grand storytelling. Simply put, time has passed. There might be the urge to avoid such a passing of time given the headaches the five year timeline the New 52 has brought about. Snyder chooses to tell his story and it adds to the depth of it all. Seeing what happens in this one issue, you get the feeling that this is something that could easily have been spread out over even more issues. But of course there could be some readers that wouldn’t want that.

This oversized issue has such a great look. Greg Capullo, Danny Miki, and FCO Plascencia have successfully transformed Gotham City into a strange and lush environment. Capullo does a great job in drawing characters in different positions in each panel. When Bruce walks into a room, rather than have characters in a stiff or static position, you get a sense they are in the middle of something and actually moving around, rather than sitting still for the shot. The colors continue to shine with a muted brilliance. There have been circumstances throughout Zero Year that have allowed for brighter and more vibrant colors. This is a great looking comic.

The passing of time is still a tiny concern. Yes, we should just focus on the story but, as comic book readers, we’ve been conditioned to think about continuity despite the occasional glitches the New 52’s timeline has given us.

Riddler has really become an unstoppable villain. He’s accomplished so much without any opposition for some time now. This is in the early days and before all the heroes existing in the New 52. This is taking him to a different level and hopefully won’t be ignored the next time we see him after this story. How could he go back to his bumbling old self after this?

Zero Year continues and Savage City is giving us and Batman a Gotham City unlike any seen before. Batman is still early into his career and it appears Riddler is more formidable than anyone thought or realized. Snyder story continues to have a big epic feel and the art and color by Capullo, Miki, and Plascencia is astounding. Some may say this doesn't feel like a typical Batman story but that's what makes it stand out. We're seeing Batman and Gotham City in a new light. Despite being set in the past, there's still no telling what will happen next. Zero Year continues to be an explosion of fun. 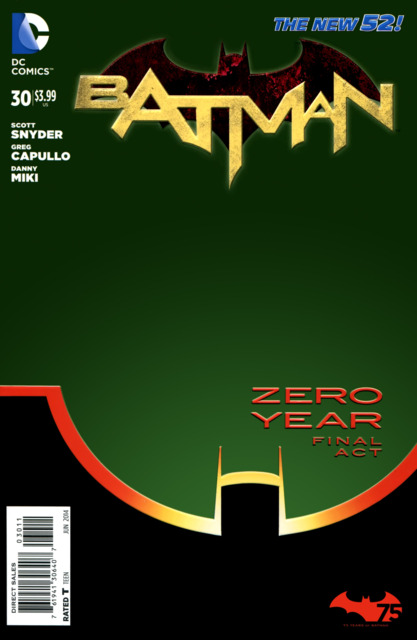