Everything gets put on hold as we take a glimpse into the future of Batman and Gotham City.

Is this a filler issue? Originally it was supposed to be the conclusion to the Zero Year: Dark City arc. To give Greg Capullo more time to work on the slightly extended issue and to give us a treat, this issue jumps forward, not back tot he present, but further into Batman and Gotham City's future. Beginning in April, we will see the weekly BATMAN ETERNAL series and Scott Snyder has mentioned this issue takes place about in between issues 39 and 40.

While we'll try to avoid spoilers here, it is known (from the preview) that Harper Row is up to something. We've seen her pop up every now and then and know how Batman feels about her placing herself in dangerous situations. That's part of the fun in being able to look ahead, finding out what may or may not have changed.

What more we can expect is something big has happened in Gotham. We don't know the specifics but seeing how things have changed--seeing how characters have changed as well as who might pop up, it's going to be a fun and long wait to have BATMAN ETERNAL catch up to this part of the story.

Back to the original question, is this a filler? If it is, it's an amazing one. You'll get hooked on the action as you take in everything going on and almost forget that this is quite a tease. Snyder and James Tynion IV are almost mischievous in the way they show us so much only for us to have to wait for so long to find out what happens next.

Dustin Nguyen handles the pencils with Derek Fridolfs doing inks. We're so used to those two working on L'IL GOTHAM, it's great to see them back in a 'regular' comic. I'm immediately reminded of their Heart of Hush (in DETECTIVE COMICS Vol 1) and House of Hush (in STREETS OF GOTHAM). And of course those final covers to Stephanie Brown's BATGIRL series. It's sad that LI'L GOTHAM has ended but let's hope we see more of Nguyen and Fridolfs in the Batman Universe.

It's going to be a long wait for BATMAN ETERNAL #40. There was a moment or two where Harper looked a little inconsistent but no overall complaints.

It's understandable why Zero Year skipped this month. But, just as Villains Month interrupted the story, this sort of does as well.

I didn't want to look forward to this issue. I've been trying to not get excited over the idea of BATMAN ETERNAL and I didn't want to see Zero Year interrupted. This issue offers a great tease as to the epic craziness we can expect. Big things are happening in Gotham City. It's not going to be a picnic. Scott Snyder and James Tynion IV are cruel in how they show us so much only to leave us hanging for months. If this is any indication of what we can expect in BATMAN ETERNAL, it's going to be a fun new series. It's great seeing Dustin Nguyen and Derek Fridolfs back on a regular issue. LI'L GOTHAM will be missed but you can see they're just warming up here. It'll be nice if this is just the beginning of their time in the New 52 Bat Universe. And hopefully you managed to avoid spoilers about this issue before you read it. 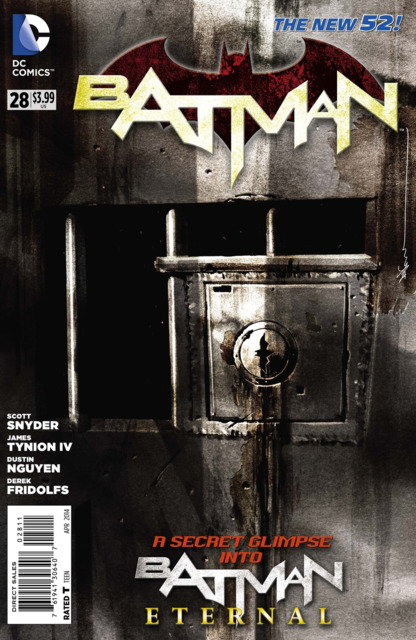