We're seeing Batman in his early days. Just because we know how he started doesn't mean we know everything that happened.

Zero Year is heading towards the end but you won't be able to think about that as you become immersed in this issue. Scott Snyder is laying out the story on different levels. It's crazy if you think about this being a sort of 'Batman origin' story yet we're seeing so much for the first time.

It's strange to see Batman at this point in his career. Last issue ended with the GCPD getting the drop on him and opening fire. Batman is supposed to be able to handle any situation. He's always prepared. But things do not go well for him at all. That's part of the glory with Zero Year - seeing the legend unfold.

Greg Capullo gets to draw Batman in a way we don't often get to see. The action gets intense and FCO Plascencia's colors will blow you away, as usual. Man, do I love that cover!

Those hungering for non-stop action might be a tad disappointed as we delve more into Jim Gordon's story. Trust me, it's worth slowing things down for this. We've seen Bruce's deep hatred for Gordon and we get the details here. Snyder's also been laying out other little mysteries as well and we get some answers to those as well. Last issue had some interesting moments, such as when we saw Bruce get a phone call. There's still some other little mysteries building as more on Tokyo is brought up.

I mentioned the slowing down part in this issue. For me, it was an intriguing part of the story. It's building up the relationship and characters for Batman and Gordon. Others might not agree.

We'll have to wait an extra month to find out what happens after this issue's cliffhanger since BATMAN #28 will jump forward a bit to allow Capullo to work on the slightly oversized next chapter. (You can read more about that HERE).

This is Batman like you've never seen. We're used to Batman being prepared for anything and able to take on anyone. We all know Scott Snyder loves Batman but, man, he is giving him the beating of a lifetime. The whole Bat-team of Capullo, Miki and Plascencia are in top form, as usual. It's great getting a different kind of Batman story. There's plenty of mysteries being laid out and revealed. Reading Zero Year has been a blast. 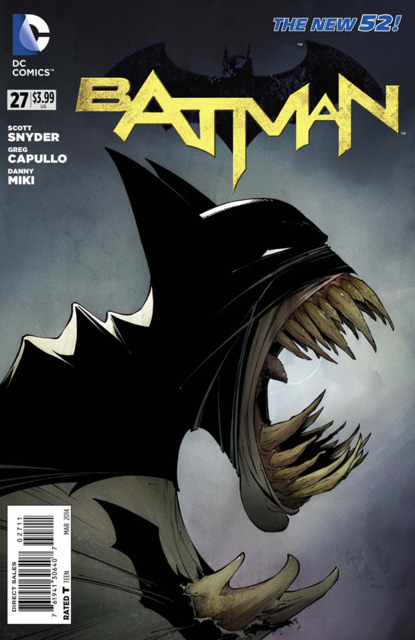