Bruce Wayne may have finally become Batman during Zero Year but it's Bruce Wayne that has to fight Doctor Death.

How many times can I say how much I'm digging the idea of Zero Year? The idea of seeing a younger Batman, early in his career, face his enemies for the first time since the DCU has change as a result of the New 52 is something I wanted from the beginning.

There's basically three different plot lines going on here. The main focus is on Bruce Wayne, recovering from Lucius Fox's apparent attack last issue and trying to deal with Doctor Death, while in his civilian guise. This shows us more what Bruce is about. Being drugged and trying to fight this deadly villain without his Bat-tools is pretty cool to see.

We also get more insight into why Bruce has such a hatred for Jim Gordon. It's a pretty heated discussion with a powerful image. And, of course, there's also another mysterious plot unfolding as well.

Greg Capullo, Danny Miki and FCO Plascencia do a remarkable job with the art and colors. It's great (and still a little weird) to see such vibrant colors in a Batman comic but it all fits in nicely with the story. Capullo gives us that hard-hitting art that's just so crisp and clean. This is a comic that you can appreciate in both printed and digital form. If you do read it digitally, you'll find yourself zooming in on certain parts to get a closer look at it all.

I'm having a blast with this series. Dare I say, I'd love it if Zero Year lasted even longer? We have plenty of other Bat-titles to carry on the present day stories.

Zero Year continues to be a thrilling ride. With each chapter, we're discovering that we don't know everything about Batman's early years like we thought we did. Scott Snyder is carving out a new piece of history and the art team of Capullo, Miki and Plascencia is spoiling us. It's an exciting time for Batman and we're getting to see him like we don't often get to. This is the type of story you can dive into and just turn everything around you off. Zero Year is a time period I don't want to leave. 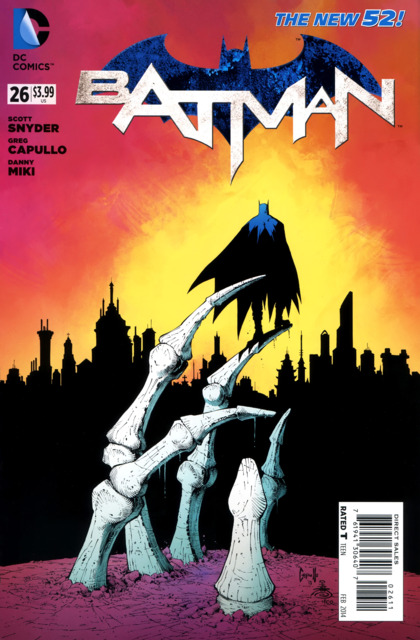