Zero Year continues and Bruce Wayne is ready to become Batman. Will he be ready to face the Red Hood Gang leader?

We've had to wait since August for this installment due to Villains Month. The oversize nature makes it worth it. As amazing as seeing young Bruce Wayne gearing up to become the man we know, this is the payday. As you can see on the cover and from Bruce's declaration last issue, he is ready to become a bat.

Some time passes from the ending of last issue. This allows both Bruce's plans and the Red Hood Gang leader's plans to move further along. There is almost a surreal nature in the comic, witnessing this first moment - the birth of a hero. You'll get excited to see a familiar shape grace the pages of this series but then you'll realize you haven't quite seen anything yet. Greg Capullo's pencils with Danny Miki's inks and FCO Plascencia's colors will blow you away. Wait until you see the visual feast in a glorious two-page spread.

It's a different time in Gotham. Seeing the Red Hood Gang's plan unfold across the landscape of this city without a protector is a weird sight. Seeing parts in the daytime as well as early stages of the Batcave is so strange. I never realized how much I've wanted to see this period. It's almost as if Scott Snyder was writing this for me personally. (Can I at least pretend?)

With the size of the issue, it feels as if Snyder is crafting an epic story. Having the room to be told over so many pages, with so many different scenes and locations, it's too bad we can't get comics this length each month.

There are so many great scenes and visuals. It's almost hard to decide which is my favorite part of the issue. It all builds up to a perfect ending, even though there is still more to the story. The backup with art by Rafael Albuquerque gives some closure while continuing to move the story to the next chapter.

I wish a certain image hadn't been revealed before the release of this comic.

I'm all for artistic interpretation and I love Albuquerque's art but his Alfred looks a little different than Capullo's. It caught me off guard for a moment.

With each chapter of Zero Year, I find myself surprised at how much I crave to see a story in this time period be told. This is supposed to be the main Batman title and it might be a little odd not to be taking place in the current time but that's perfectly okay with me. There is a great sense of isolation as Snyder and Capullo are able to tell the story they want to tell without having to worry about other events or crossovers. We all know Batman's origin, or at least we thought we did. Snyder shows that there is more to tell. He's giving us a story that is filling in the gaps when we didn't even realize there were these many gaps that could be filled. This is an issue you'll want to read over a few times to take in all the tiny details in the text and images to make sure you don't miss anything. Thankfully Zero Year is not over. Even with an oversized issue, I'm still craving more. 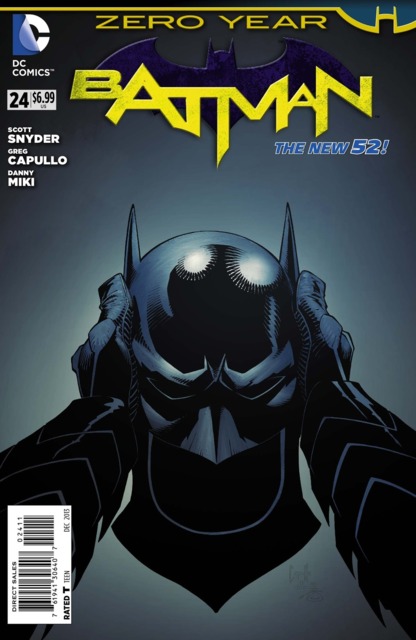