Zero Year continues but it looks like this could be the end for Bruce Wayne. And get ready for a pretty insane backup story as well.

Last issue ended with an explosive cliffhanger. Going back to the Zero Year, we're seeing Bruce Wayne begin his war against crime before he officially became Batman. Having just returned to Gotham City, he's found the Red Hood Gang running amok and after a couple run ins, things have escalated.

One of the amazing things about this arc is seeing a less experienced (and less perfect) Batman. We're seeing a rawer version and he is taking quite a beating. But he is determined to carry on his mission. The encounter with the Red Hood Gang is a pretty big turning point. You absolutely will not want to miss this issue. One scene in particular really should get you to jump out of your seat and cheer. You'll know what I'm talking about when you see it. It's a very classic moment done in a really cool way that makes much more sense in this fashion.

Of course it's not just about the Red Hood Gang. We also have Edward Nigma running around plus more on Uncle Philip's plans.

Greg Capullo's art continues to impress along with Danny Miki's inks and FCO Plascencia's colors. I've mentioned it before but throughout this arc, we've been exposed to some very non-typical Batman scenes. The colors have been jumping off the page in the daytime scenes and even in this issue, pretty full of darkness, it all looks so incredible.

If the issue ended with the main story, this would still be a great issue. But instead, it continues. Scott Snyder and James Tynion IV continue the stories that journey even further back into Bruce's training. Taking place near Norway, we get an amazing story of Bruce Wayne fighting in death match. Rafael Albuquerque's art is so good it almost makes you cry.

If you thought Zero Year couldn't get any better, you were mistaken. Scott Snyder is taking Bruce Wayne on a rough journey as he is on the verge of becoming Batman. You can see the story meticulously being laid out. We may not be used to seeing this less experienced hero but we are seeing the determination and tenacity that will shape him into the hero we know and love. A certain key scene is laid out with such extraordinary care, you'll be in awe as it plays out. Greg Capullo's art with Danny Miki's inks and FCO Plascencia's colors continue to make this a visual feast for our eyes. In the backup, Snyder, James Tynion IV and Rafael Albuquerque show us a remarkable chapter in young Bruce's life. I didn't think I could like a BATMAN comic more than I have before until I read this one. It just keeps getting better and better. 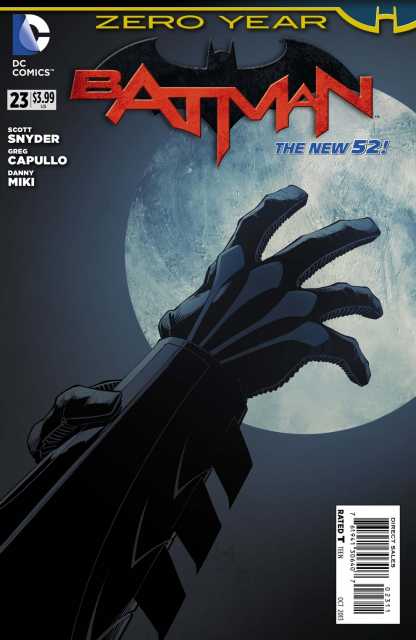