The Joker gets the spotlight and we (maybe) get a look into his past. Is it a look we want or need to see?

You can't have a month focused on DC villains and not have the Joker around. We may not know the current status of the Joker in the New 52 but this issue gives us a chance to journey back to an earlier time in his career.

Andy Kubert makes a bold decision (assuming it his and not editorial's) and shows us some scenes from Joker's childhood. If these books are supposed to focus on the villains, seeing their story makes sense. It's interesting, but being it's about the Joker, is it something we can fully believe?

Andy Clarke is on hand for the art. It's been great seeing Clarke doing some of the backups in this series and we finally get to see him do a full issue. Everyone seems to have a different take on Joker and it's fascinating to see how he approaches the character. Whereas the Joker can sometimes be a two-dimensional character, Clarke actually manages to give us some expressions other than the usual borderline insanity we always see. That almost makes his depiction scarier than others we've seen.

Joker wants to start a family. We see a flashback story where he takes a baby gorilla from the zoo and "raises" him to be a partner in crime. It is a pretty wacky thing, something Joker would be capable of.

What it comes down to is we don't need to see Joker's origin. It's possible this is just a fractured memory, similar to the possibility in THE KILLING JOKE. I don't want or need to be sympathetic with Joker. He's a pure villain, that's all I need from him. Am I supposed to feel bad that he might have had a torturous childhood? No thanks.

This story doesn't really add much to Joker's mythos either. When all the Villains Month issues are raised in price due to the special covers. Even at the regular price, it's an okay story with some good art.

This is going to be a tricky month when it comes to the Villains Month titles. Many of the titles feature origins or flashback stories. It makes perfect sense the first BATMAN villains book would focus on Joker. The problem is, you don't really feel this story adds a lot to his character. We don't need or want to see Joker's childhood, if the flashback scenes can even be trusted. Joker with a gorilla is a fascinating idea but it just didn't feel crucial in any way. What bumped up my enjoyment for this issue was seeing Andy Clarke's art for an entire issue rather than just a backup story.

It's possible the wacky and...odd nature of the story was intentional because we're talking about the Joker. Maybe I'm missing the point. With so many Villains Month titles fighting for our dollars this month, this was a little disappointing. 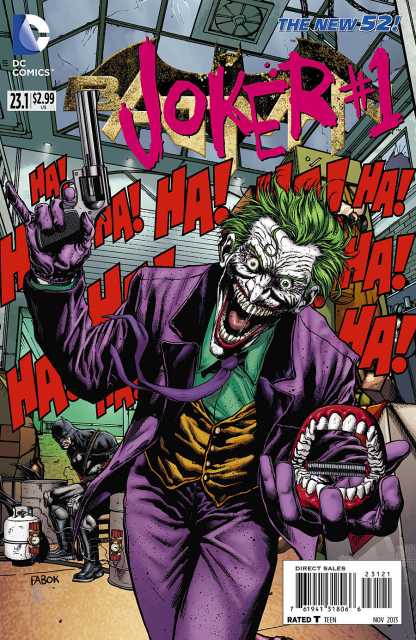