Zero Year continues and this isn't quite the Batman we thought we knew. It's a trip seeing him develop into the character we love.

The very first thing you'll notice upon opening the comic is the colors by FCO Plascencia. BATMAN has always been a great looking comic but rarely do we get to see colors like this in this title. Besides getting to see Batman's early days, we're also getting new settings and situations in Zero Year. As a creature of the night, it's refreshing, if a bit odd, to see so much brightness in a Batman comic.

A Gotham City without a proper Batman is such a strange thing. Scott Snyder is doing a great job simply establishing the vibe of the city that isn't being protected by the Dark Knight. The presence and rise of the Red Hood Gang creates a new unknown. Bruce is still pretty raw and inexperienced (even if he's been training for years). We're seeing a "Batman" that isn't the perfect fighter that "always wins." You'll clearly see that the leader of the gang isn't just a silly guy in a strange helmet. We're witnessing his rise as he becomes a bigger threat is setting up what we can assume will be a dynamic final battle with Batman.

Greg Capullo's art shines as usual. In some cases, literally. Seeing the reflection of a familiar character on the helmet combined with Danny Miki's inks and the colors really makes the scene pop off the page.

Throughout the story, Snyder continues to throw twists and turns our way. The main thing is, while this is a less experienced Batman, he still shows how clever and resourceful he can be.

Of course this isn't just about Bruce vs. the Red Hood Gang. Snyder continues to give us a glimpse into Bruce's early days as well. The scene, art, lighting...it's all spectacular. That's not all the visual treats we get. You really get the feeling that the entire Bat-(creative)-team is really upping their game in making this an incredible comic. I won't even allude to how the story amps up towards the end.

The backup is once again co-written by James Tynion IV with art by Rafael Albuquerque. As great as it is seeing a younger Bruce in Gotham in these early days, seeing him even before, as he goes about the world learning different skills is completely fascinating as well.

It was another great issue. The only "bad" thing is a scene about midway between Bruce and another character. It's not bad at all, totally fitting for the story. It was just hard to read. You'll see what I'm talking about when you read the issue.

The first chapter of Zero Year was great and you can see that it gets even better with the second. This is not just a retelling of Bruce's early days. While we do see how he started becoming the hero we know and love today, there's so much more to this story that makes it feel completely new at the same time. Every single creator involved is in top form here. You get the impression they are really putting their all into this issue. The writing, art, colors, lettering...it all looks so good. We're only in the second part and I'm already looking forward to buying this again in a hardcover format because I'm enjoying it so much. This is definitely going to be a story I will re-read over and over. It may be Batman's origin, in a way, but there's simply no telling what's going to happen next. 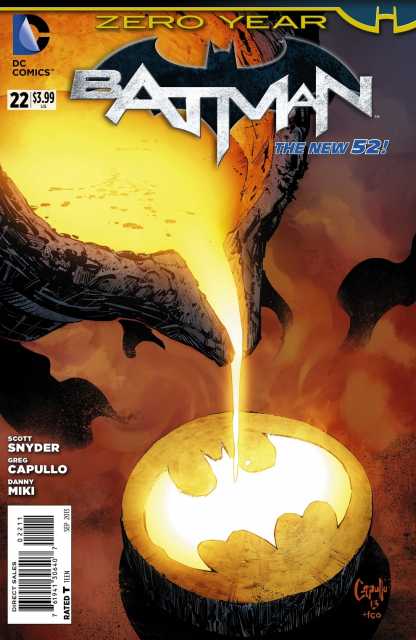