Batman #21 - Zero Year: Secret City, Part One; Where the Hell Did He Learn to Drive?!

Zero Year is here. Think you know the full story of how Batman started out? There's a lot more going on than you realized.

Page 1 - Blam!! This is the way you start out a massive Batman 'event.'

Taking place six years ago, you'll find your jaw on the floor as you look over the first few pages. As soon as you start reading, you'll find yourself muttering to yourself, "Scott Snyder…what the heck have you done?"

Zero Year is like a grand adventure. It's amazing that a Batman book that doesn't fully focus on or contain "Batman" can be so compelling. We're looking at the man behind the cowl - Bruce Wayne. Gotham City clearly was a different place before Batman made a name for himself. That doesn't mean we won't see some crazy over-the-top action.

Snyder makes it clear right away this isn't the Batman we're used to. It's only six years but we know or assume a lot has happened in that time. Bruce is a little green around the edges but that doesn't mean he is incapable of handling all the chaos and action Snyder will be throwing at him. His interaction with Alfred is interesting and not what we're used to.

There is an almost soothing effect in reading a Batman story with this isolated feel. The idea of exploring Bruce's early days is one I've been longing for since the New 52 started. The fact is, we do not know the whole story. Despite most of his continuity remaining in tact, things around him have changed. But this isn't simply a matter of iron out any wrinkles. Snyder is going full force in delivering a new story. As we start to hear the details of what's been going on in Bruce's absence, you get pulled in deeper and deeper.

Greg Capullo and Danny Miki go all out in terms of the art. It's only six years but Bruce does subtly look different. FCO Plascencia's really shine as a lot of the story actually takes place during the day, rather than the normal dark settings we usually see Batman in. It's such an amazing contrast to the normal Batman story.

If that wasn't enough, Snyder, James Tynion IV and Rafael Albuquerque take us to Brazil where we see a nineteen-year-old Bruce Wayne. It's a great and fun look even further back in Bruce's life.

I am strapped in and ready to enjoy the ride. I'm all for seeing new adventures with Batman but I am completely on board with exploring more of his past in the New 52 Universe.

If there was any doubt that pulling Batman out of modern continuity and exploring his early days could work, this issue immediately proves it does. Seeing Bruce Wayne starting his career, going up against the Red Hood Gang and just the fact that some crazy stuff is going down, I can easily see this lasting eleven issues. Zero Year is off to a great start and right away, I don't want it to end. There's a deep mystery bubbling on the surface and the glimpses we get into Gotham in this time period is fascinating. Capullo, Miki and Plascencia make the visuals shine. This is not your typical Batman story and it shows. We get a great backup by Snyder, Tynion IV and Albuquerque that is highly enjoyable and makes the issue fun. Zero Year may be a visit to the past but I am on board with this being an extended stay. Snyder may have taken a risk by setting a long story in the past but it completely works. It's comics like this that make me excited to be a Batman fan. 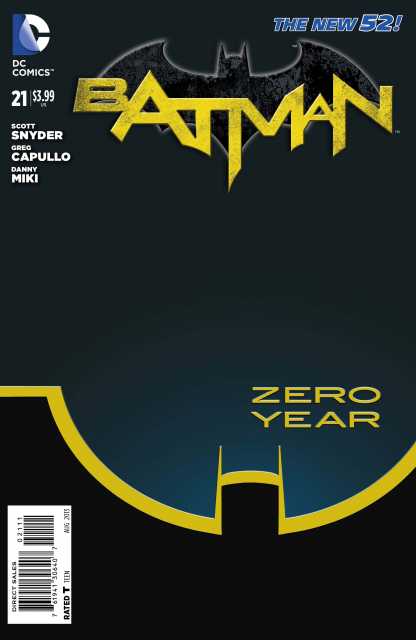