It's Batman vs. Bruce Wayne...sort of. It's a fight you never expected to see. Plus the conclusion of the back up teaming Batman with a really super guy.

Last issue we has the surprise opening where we saw Bruce Wayne acting very out of character in his confrontation with the GCPD. We later got an idea how that situation came about but the story jumped back to the events leading up to it. Seeing it unfold gives the story a different feel as we watch the pieces fall in place.

By now it's likely known that the villain here is Clayface. I can respect him as one of Batman's villains but he never really came across as a credible threat. From a creature/monster angle, he has a great design and offers a variation in Batman's villains but he never really got me excited. Seeing him here changes some of that. Scott Snyder has taken Clayface to another level.

Of course seeing Greg Capullo's art during the battle scenes is phenomenal. FCO Plascencia colors here really shine. Having big portions of the issue take place in brighter settings makes this story look different and lets us enjoy all the details. Bruce Wayne fighting Clayface in the Wayne Enterprises R&D lab was great. Bruce can't fight as Batman so he has to rely on different tactics.

The whole angle of Batman Inc has always been questionable for the direction of Batman. There are pros and cons and we get to see more of the effects of Bruce's decision to go this route. Snyder also touches a little more on the aftermath of what happened to Damian.

And of course you have to love the little easter egg thrown in at the R&D lab crusher.

The back up by James Tynion IV and Alex Maleev concludes and we get an interesting take on both heroes and their relationship with each other.

While I love Clayface here, it does feel too soon after his appearances in DETECTIVE COMICS and Death of the Family. There was an explanation last issue for his change but it felt a little sudden after his recent appearances. We also don't get a full explanation why Clayface, when mimicking Bruce, he decided to make him wear some Bat-armor underneath his suit if it's all clay.

The back up was great in adding to the dynamic of Bruce and Clark's relationship and the story was interesting but it could have benefited from being a little longer. It felt as if it ended a little abruptly.

Batman vs. Bruce Wayne. With Greg Capullo's art and FCO Plascencia's colors, it's a visual treat. Scott Snyder has taken Clayface and taken him to another level. Unfortunately with the numerous other Bat-titles, this Clayface story felt too close after his appearance in DETECTIVE COMICS. The main story was really good as was the back up but it almost feels like we're just biding our time for the beginning of next month's Zero Year. 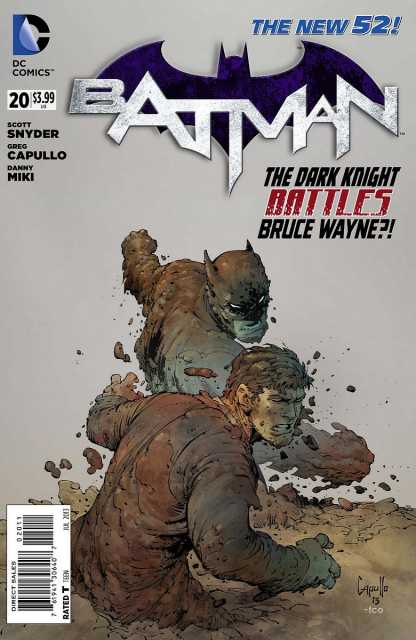