Scott Snyder is a tough act to follow, and while we have to keep these volumes separate and try not to think about that, it's extremely hard to. However, two issues in, writer Tom King and artist David Finch have already put their stamp on this series. Batman feels a bit colder here. He's more calculating and a bit short with people. It's a Batman who's a lot more over-confident because it feels like he's "seen it all" at this point, and that could partially be his downfall. King really defines who Batman is with the second issue. We saw, in the first issue, the lengths Batman was willing to go to save human lives. This issue defines how he works. His thought process. We get a little bit of the Bruce Wayne/Batman juggling act, but here, Batman is more of a detective more than anything else. However, he's not solving a crime. He's trying to fit all these new pieces into his puzzle.

Finch, inkers Matt Banning and Danny Miki, and colorist Jordie Bellaire are one dynamite team on this book. As we said with issue one, this is Bellaire's best work to date. Her work gives this book the little bit of light it needs to keep it hopeful and to take it out of the dark.In addition, this is some of Finch's best work as well. His panel-to-panel storytelling is on fire here. This is a book you could buy for just the art alone. Luckily, you get a whole lot of good story as well.

King lays out a ton of info in this second issue. There are a lot of different stories being weaved into the world of Batman here. That's a bit where the problem lies. These stories are intriguing, without a doubt, but it's too much to pile on. It becomes a bit overwhelming by the time the reader is finished with the issue. On the bright side, everything being piled on the reader is really good and worthy of its own story. Our only real question is "How can Batman take out Solomon Grundy with a toss, when the two metahumans punching him couldn't do it?" Maybe we're just getting nit-picky.

Batman fans should be pretty excited about this issue. Sure, it does lay down a lot of story, which sometimes can be a tad over-barring, but overall, this second issue does a stellar job at defining who Batman is going to be during King and Finch's run. What really raises the bar is that this has an appeal to both new and old Batman fans. There's never a point where either will feel lost or alienated.This book, thus far, is turning out to be one of the better Rebirth titles. I highly recommend checking this one out. 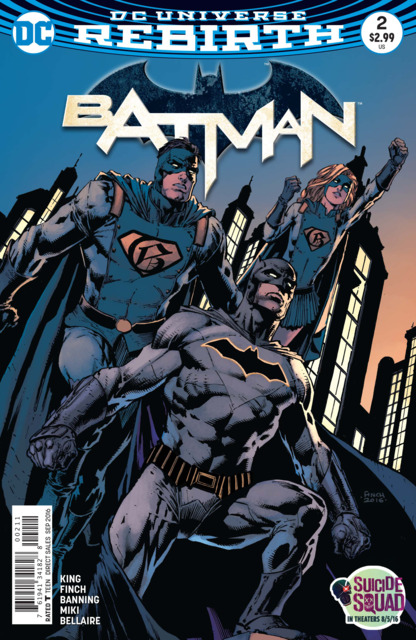