Get ready for a trip to Crazy Town as Bruce Wayne becomes a dangerous threat to Gotham and the GCPD.

There's nothing like some craziness and mystery to start off a comic. From the gatefold cover with Bruce Wayne holding a gun at Commissioner Gordon to the opening sequence, Scott Snyder and Greg Capullo work together to give us some shocks. Capullo cleverly lays out the scene to give us a sense of the scope of the situation. We're treated to a mix of different angles and perspectives that really gives you a feel for what's going on. Aside from the shock of the situation, it's almost as if they're reading our minds by showing us every possible angle in case we had any doubts about what was happening.

Before we get all the answers and things start to get really insane, Snyder pulls a "Six days ago…" on us. This type of storytelling can be fun at times. It's not something that Snyder has used often so that makes it work. There is a certain charm when we're brought into the middle of the story and then it flashes back a bit to bring us up to speed. Seeing the Reaper brings me back to Batman: Year Two. The character may have a bit of a confusion history given the different people that have worn the costume but it's great seeing a character we haven't seen over and over. The flashback to six days ago also allows us to see more of how Bruce is dealing with the current events in his life.

This leads to Batman being put on a case and forced to do some detective work. We don't often see Batman doing this much detecting in comics so it's a fun treat, even if you might already know what the answer might be. Seeing Capullo draw the scenes leading up to the end reminds us just how detailed and sometimes grotesque he can make things.

The back up features Batman and one of the few characters he would consider a friend (I won't spoil it even though it may be common knowledge who appears). James Tynion IV and Alex Maleev give us a fun tale that pulls the characters away from their current events and reminds us why and how they can work so well together. I can't say I'm super-crazy about the threat they're dealing with but it does make a fascinating story.

The twist in this issue would have been better without having prior knowledge of who was responsible. Even though it wasn't specifically mentioned in the solicit for the next issue, the cover did make it a little obvious. That also gives other possible spoilers as well. I might be looking too deeply into this but as crazy as the opening scene was, you have to know something's going on. But the fun part will be in seeing why it's going on.

It's almost strange in a way to see Batman in this title seemingly take on a 'smaller' case after the epic Court of Owls, Night of the Owls and Death of the Family stories. It should be a relief to see Batman involved in a shorter lasting story but there was a tiny sense that we're just biding our time until Zero Year. Perhaps it's just the anticipation of that arc that is building up inside me.

Speaking of Zero Year, that exact phrase is actually used in the comic. It's meant to be a small tease for us but hopefully there will be an explanation why it's used by the character. It felt a little out of place to be said in the story but I'd imagine Snyder has something planned in the upcoming story and this will turn out to be a phrase that some actually use.

The last we saw of a certain villain was in Arkham Asylum. I suppose in the craziness of the events in Death of the Family, this character, and likely others, managed to escape since the place was in chaos.

As great as the art was last issue (I do love Andy Kubert's pencils), there is a reassuring feeling seeing Greg Capullo's pencils along with Scott Snyder's words. With a crazy opening scene, it's a wonderful change of pace to see the action take place in the middle of the day. Capullo gets the opportunity to depict the characters in a brighter light and we get a chance to see Danny Miki's inks and FCO Plascencia's colors shine. The issue does start out with a pleasant mystery but there seemed to be a slightly obvious explanation as to what was really going on. Maybe it's just from reading Batman for so many years or maybe I'm just being too hard on the issue. Having the story shift back some days before the opening gives us that tease of a feeling knowing where the story is going to go but not being really sure how it will get there. Seeing Batman do more detective work is always a welcomed sight. James Tynion IV and Alex Maleev begin an interesting back up story that shows us why Batman works so well with a particular other character. Snyder and Capullo continue to show us you simply can't go wrong with BATMAN. You're always guaranteed a good time. 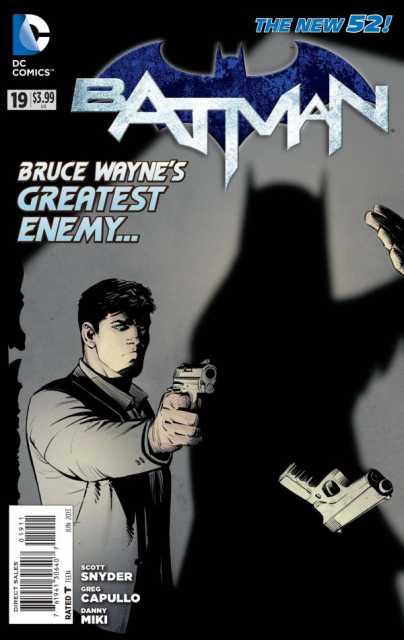