The future for Batgirl may or may not be what you thought it would.

I'll start off by saying that I haven't fully dived into FUTURES END. Last week's first round of special issues didn't really grab me either. BATGIRL FUTURES END is something different. While not necessarily tied directly to the events in the weekly FUTURES END series, Gail Simone gets the opportunity to delve into Barbara Gordon's future and evolves the character in a fascinating way. We also get to see the idea of the legacy of Batgirl.

Batgirl holds a special place for a lot of people. The wonderful thing about Simone's final issue is there is something for everyone. Simone does a stellar job showing us this potential future for Barbara as well as an incredible transformation of her character. You'll feel the pain of certain events as well as the joy in seeing what else the future holds. If you know me, you know which part made me especially happy.

It's almost shocking what Simone is able to do in the "five years from now" time period. I had some high expectations but didn't want to get my hopes up. Simone's take on the future was incredible and even surprising, in a good way. With some of the other FUTURES END stories, the futures feel pretty bleak. While there is a dark tone going on, we're also filled with a great deal of hope. This is the sort of what if/future stories I want to see.

Javier Garron does a fine job with the different time periods. With this taking place in the future, we get to see some new characters and designs along with slightly older versions of familiar characters. The "future" Batgirls are great. I'd love a miniseries showcasing them to continue their story. We get plenty of cool action and nice twists that make this an issue you won't want to miss.

Even though we get what we want and see things we've been waiting to see, it's still just a possible future story. We know there's no way everything we're seeing in these FUTURES END stories can stick (unless the entire New 52 timeline decides to permanently jump forwards five years). It's a great story and gives us hope but the things that happen can easily be put on a shelf and never referred to again.

While not being fully on board with the notion of the FUTURES END stories, this is one that caught me by surprise. Gail Simone knows and cares about the Barbara Gordon character. She ends her run on the series but showing us a possible future and puts her through the wringer. Usually future stories are full of despair but Simone's take on Batgirl and her legacy offers some hope. Along with Javier Garron's art, we get some cool designs and you can't help but want to see more of this corner of the "five years from now" timeline. The events of this story may never come to be but you'll definitely want to see what Gail Simone has given us. You'll definitely want to thank her the next time you see her at a convention. 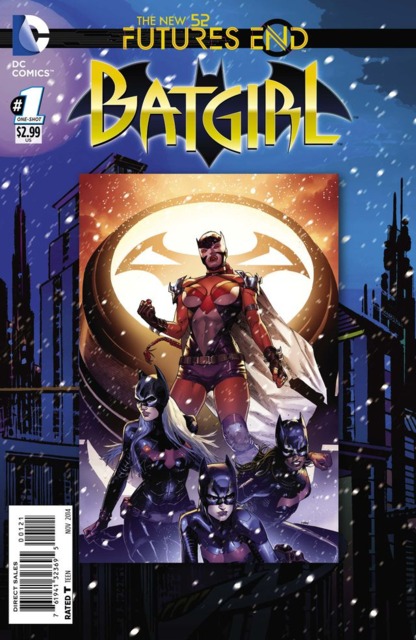