She's in a new town and has a new costume. Is this the same Batgirl we knew before?

Jumping on points in comics are sometimes difficult to pull off. The idea is to make a book completely accessible to new readers without forsaking those that have loyally stuck around for some time. BATGIRL #35 is a jumping on point. For the most part, you don't need to know or worry about what happened before. At the same time, the appearance by Alysia, Barbara's former roommate, ensures the previous issues haven't been forgotten.

With a new look, courtesy of Babs Tarr (and Cameron Stewart), the book does have a fresh feel to it. That isn't saying the book wasn't fresh before but you can definitely sense the new vibe going on. Barbara Gordon is a young character. It's stated that she's twenty-one (I thought she was at least a couple years older but where her age was listed didn't necessarily have to be completely accurate. Going back to college, we're seeing Barbara with a new cast of characters in a new city.

Stewart and Brenden Fletcher are coming up with a modern day feel. There is a mix of lightheartedness combined with some of the common instances in today's society. When there is an individual obtaining people's biggest secrets and threatening to post them online, it's something that sounds very familiar given recent events.

The more I read, the more I was falling in love with the art. It's great is seeing Barbara use her eidetic memory and how it's shown on the pages. Her new costume (and why she actually needed one) is pretty fantastic. It's also not just a bunch of new characters as we do see a very familiar face. What role this character will play in the coming issues remains to be seen but it's a welcomed presence.

Maybe it's my age starting to show but I felt there were some moments and themes almost too meta with today's social media-driven society. It is important to reach out to your target reading demographic but it almost started becoming too much. You have to wonder what older readers will think of some of the big changes in look and direction. It also might not be something to really worry about in the present but pulling from current events and trends could seriously date the issue when read later one. It's nice when stories can stand the test of time. This new direction has a lot going for it and I'd love for future generations to be able to stumble upon this series and enjoy it.

The villain was interesting. I am curious how he gained his ability. His accessories couldn't be cheap to come by. He also had some impressive fighting skills.

There's a new direction for Barbara Gordon. Batgirl has moved to a new town and because of certain events, she even makes herself a great-looking new costume. This makes a great jumping on point for new readers and doesn't ignore past events. You can feel the vibe of the story trying to reach a younger and hipper crowd. It's definitely an interesting change for the book but does feel like a little too much at time. Don't be fooled into thinking this is being geared towards youngsters. There are still some more adult themes going on. You will want to check this out to see the changes. The book was good before but you can feel a different sort of energy pulsing through the pages. 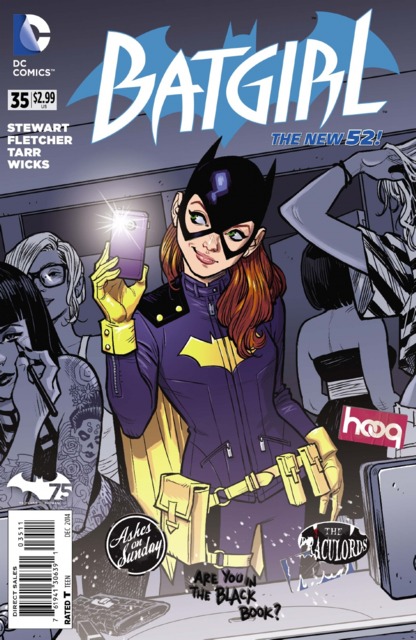