Mignola teams up with an incredible artistic team to deliver a story with suspense at every turn.

One of the big highlights of this issue for me is seeing Gabriel Ba and Fabio Moon working on a B.P.R.D. series with writer Mike Mignola. I always really enjoyed their art and the two artists together really do a phenomenal job illustrating the latest issue of B.P.R.D. The result is a beautifully drawn book that really fits in with Mignola's universe. The artists create a dark, brooding environment for Mignola's characters to play in and they really set the mood by utilizing shadows and heavy inks giving the issue a very eerie and somber tone. The result is really lovely.

Mignola uses language that draws readers into his story almost immediately making the story seem accessible even to new readers who may have missed the previous issue. He introduces Hana and Mister Anders within the first two pages of this issue and establishes that the two are searching for a way out of a mysterious and seemingly ancient building. It doesn't take very long before the first real conflict and the character of Mister Anders finds himself lured into a very eerie and mystical situation. As usual, Mignola keeps the language very simple allowing his artists to tell a great portion of the story for him. By keeping the dialogue at a minimum only serves to add to the suspense of the story. What happens to Mister Anders halfway through the issue, for example? Readers should definitely expect the unexpected.

Anders' confrontation with the ghost -- or should we say, Vampire -- in this story is thrilling and the moments leading up to the climactic scene where the two characters first meet is just incredible. The way that the creative team creates the story board for this issue is brilliant and the result is excitement at literally every turn of every page.

Nothing bad here. This is an amazing issue and a solid jumping on point that will leave you excited from start to finish.

One of the most impressive aspects of this issue is the level of momentum. From the very start of the issue the scene is a bit tense and exciting, and that same level of excitement remains throughout. The momentum remains the same and readers will be drawn quickly into this story that holds for them excitement at literally every turn.

The artistic team does a fantastic job not only maintaining Mignola's momentum throughout, but also doing a great chunk of the storytelling in this issue. It is fantastic to see Mignola utilize their talents and the two artists really shine, creating scene after scene that will leave readers at the edge of their seats.

If you missed the first two issues you should be just fine jumping right into this one. The story is accessible and it is written in a way that makes it very easy for readers to car about these characters and become interested and invested in them and their respective stories rather quickly. If you love suspense and adventure then I highly recommend you give B.P.R.D: VAMPIRE #3 a look this week. 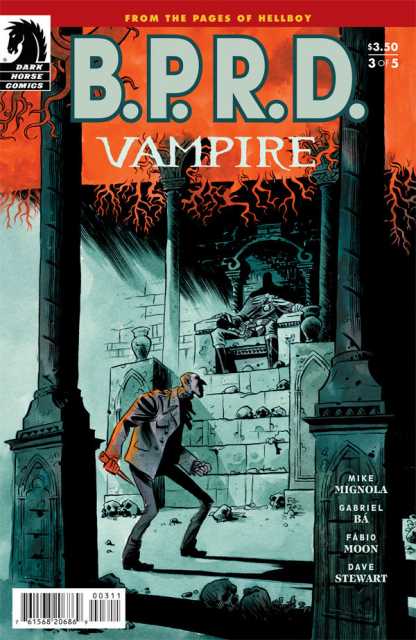