Axis concludes here but there will be some ramifications on some of the characters as a result.

We've seen some crazy things in Axis. With this being the final issue, it's interesting to see the moments where we get the chance to see some of the characters explored a little more. There's been a lot of heroes turned villain and villains turned hero but here we get to see how it's affecting them. For example, Sabretooth was turned into a hero but we didn't really get to see too much of what he thought about it. When it first occurred, I had flashbacks to his brief stint as an X-Men. Here, I'm actually curious to see how this idea could work.

That's the main thing we can take away from this event. Obviously most of the heroes and villains will be inverted back to their true natures. Rick Remender gets some brief moments to show what the changes has meant for many of the characters. With so many characters in the story, there hasn't often been a chance to see these results. During the various encounters, there are some fun moments (specifically Thor and Loki). With not everyone getting changed back, at least we'll get to see more explored.

Jim Cheung handles most of the art. Joining him are Terry Dodson, Leinil Francis Yu, and Adam Kubert. It's an impressive list of artists. There's no denying that. Paul Mounts colors really brings it all together so you don't feel too much of a distraction when the art shifts.

With the arc ending here, there is the temptation to review the entire story rather than just this single issue. The story as a whole had its ups and downs. We had some cool moments but at times it felt a little all over the place. With most of the characters reverted back to who they were before, it feels like it was just a brief notion that barely had a chance to be played with. Having so many characters in the Marvel Universe brought in and affected was cool but many of them barely had a chance to do much or get any time in the spotlight. Many of them were briefly changed only to conveniently switch back. There was a lot packed into this issue but that made it feel like we had a lot of a little.

Despite the talented artists involved, there were moments the change was noticeable. Some pages looked a tiny bit muddy with some panels a little lacking in detail compared to others.

Axis has ended and there will be some ramifications in the Marvel Universe. Because of the nature of the story, this issue was packed with characters. The unfortunate thing is many characters and the changes they went through were not able to be fully explored. With the inevitable return to their true nature for most of the characters, you kind of wonder why some were inverted in the first place. Having so many different characters involved was key to the story but too many simply fell into the background. For some characters, the change in their attitude felt sudden. As with many recent events, the importance can be measured by what happens next. It would be great to see more on how the characters' actions while inverted affect them rather than it all be swept under the rug. 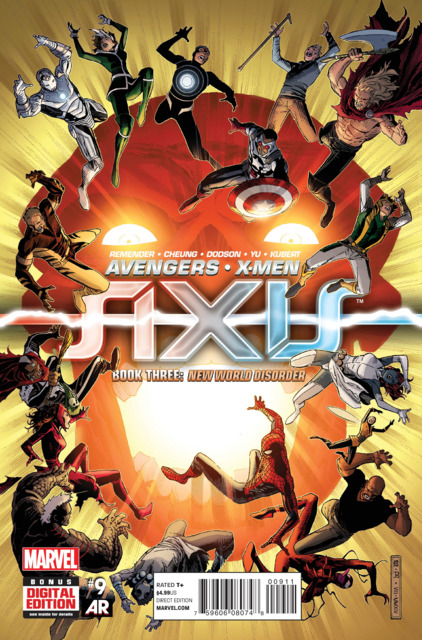