Avengers & X-Men: Axis #1 - Book One: The Red Supremacy: Chapter 1 - We Will All Be Dead Tomorrow

Red Onslaught has made his move and it's up to the Avengers and X-Men to try to stop him.

There's a lot going on here. For those feeling a little intimidating stepping into this event that has been a couple years in the making, the issue contains two pages filling you in on all the recent events that lead up to this issue. With Red Skull having gained the power of Charles Xavier and now combined with the full force of Onslaught, it doesn't look good for the heroes. As Red Onslaught, we have a villain with immense power. The ease in which he is able to gain control over some of the heroes makes it even worse during the fight.

Rick Remender is definitely pulling everything together here. It's impressive seeing how everything fits together. Even as a reader that fell behind on some issues of UNCANNY AVENGERS, I still was able to dive in here and find out everything I needed to know. You can see the hardship many of the characters have gone through. This issue is jam packed with so many characters but Remender makes it feel like they're all here for a reason. It feels natural and there's a nice feeling seeing the little acknowledgement that both the Avengers and X-Men consist of a large number of team members. It makes sense when there's a huge crisis, they'll all come out to join the fight. Seeing teammates that have been at odds with each other get along for the sake of trying to defeat an enemy was pleasant to see.

Any time we get art by Adam Kubert, you know you're in for a visual treat. What makes it even better is that this is an oversized issue. That means more pages and pretty much each page is full of different characters. There's just so much to see. There are some double page spreads that allow us to marvel at all the action.

I have to say I'm really on the fence with this event. I'm not the biggest Red Skull fan. I never fully came on board with him gaining Xavier's abilities. Bringing in Onslaught gives him even more power. The ease at which he gains control over other powerful characters such as Scarlet Witch feels too easy. Besides Red Onslaught and Ahab (another character I'm not too fond of), we mainly see heroes fighting each other. This does give the heroes insanely incredible odds to go up against. It does give a great reason to see full rosters come together. Although, there were moments there was almost too much going on in a panel to fully appreciate Kubert's art.

It might be a mix of being mind control along with inserting some humor but some of the dialogue felt a little off. We're used to see the quips in the Cinematic Universe but we don't necessarily need some attempting to be a comedian in the middle of the action. The lack of respect Sam Wilson is getting as Captain America from some teammates seemed like a bit much.

Did Remender kill a certain character he's been cultivating for some time now?

We have been getting almost non-stop event after event. It's understandable that this is what has become the nature for many comics. Events sell. It does give a good reason to bring in large casts of characters and have big crossovers. There are also times it would be nice to scale things down a bit. But perhaps that wouldn't translate into sales.

Another huge event has begun. Rick Remender has been building this for a couple years now. Since the end of AVENGERS VS X-MEN and throughout UNCANNY AVENGERS, the seeds have been planted and we're now seeing the next phase for the two teams. Remender sets up plenty of action for Adam Kubert and it's a wonderful treat seeing so many characters in one book. The downside is the feeling of non-stop event after event. I haven't come around to accepting Red Skull in this fashion although it does provide for a different take on the character. This has the makings of another big story that could have a  huge impact on the Marvel Universe. You won't want to miss out on what's coming up. 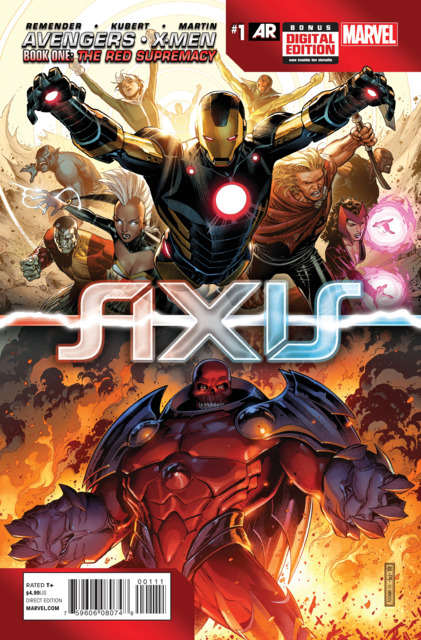