AVENGERS UNDERCOVER began to really show its true colors in the last couple of issues, but that gathering of purpose has only made the book more intriguing and nebulous as it’s clear that some participants in the “We’re Secretly Earning Pardon” party aren’t completely dedicated to the team’s goal (redeeming themselves for Arcade's murder). While conflict has sprung up all over, either due to actual internal turmoil or merely a lack of information, it’s become central to the drama of this book, and it’s working incredibly well. The teens/very early twenty-somethings are the perfect targets for the joyfully anarchic, hedonistic lifestyle that Baron Zemo and his flunkies promise, and now that Daimon Hellstrom has brought Nico’s first boyfriend Alex (from ALL the way back in Brian K. Vaughan’s initial RUNAWAYS storyline), things have become even more complicated. Dennis Hopeless focuses this issue on Nico with incredible precision, even bringing a storyline from a previous one into direct contact with her, and I still can’t say I mind how he characterizes the leads. A great many people seem to dislike, or outright hate, how the characters in this behave, but, again, we’re dealing with teenagers (and very early twentysomethings) here. Emotional instability is par for the course, I remember, I was there not too terribly long ago. But another thing that’s there is blind idealism, which is a beautiful sentiment, but one that’s also easy to twist to nefarious means, especially by someone who’s been around the block more than enough times like Zemo. Hopeless’ characterizations in this issue hits the mark every time and makes sense psychologically every time.

Kev Walker’s pencils straddle the line directly between wacky cartoon and horror movie. It sometimes feels like the cast of Doug took a wrong turn and wound up in Innsmouth. And the last bus just left the station. Things keep getting worse and worse and darker and darker in the background, but the characters in the fore remain delightful, even upbeat, in their outward appearance. But the jagged, sharp inks by Jason Gorder and the dark, grim colors of Jean-Francois Beaulieu remind you that both darkness and madness lurk behind every corner and even in the background, itself a dark and terrible place in this title.

I don’t recall Alex being an expert on magic, so it’s odd to see him mentoring Nico so closely. Obviously his true reasons for being there are likely not what they appear, but he's giving her real, solid advice on magic use despite her far greater proficiency with what she has, even the parts she only recently acquired.

There’s an odd sense of emotional vacuum in this issue. Don’t get me wrong, the characters are well-written, and very emotional things HAPPEN, but the way it’s conveyed to the reader, plus who and how it’s happening, strangely lack punch. It may be that all the characters are dialed all the way up all the time, and since they’re not on an island fighting for their lives, that level of tooth-gritting histrionics isn’t all the way called for, but something feels like it’s missing.

The final page is equal parts infuriating and gleefully shocking, and it truly does tear me along whether I think it’s an incredible direction for the book to go in or a grand cop-out.

Someone finally mentions that Baron Zemo is a Nazi. Not an "I disagreed with you on the internet” Nazi, and actual “Master Race” Nazi. That’s been a real pet peeve and I’m glad it’s been acknowledged at least. This is a great issue that I feel highlights a character who’s been getting short-shrift lately, both in terms of AVENGERS ARENA AND this title. I’m not saying she hasn’t had any great moments, but it’s great to see one of my favorite Runaways rate her own issue. Things are in a very strange place right now with where the book leaves off, but it’s definitely entertaining, and I’m definitely hotly anticipating the next issue. 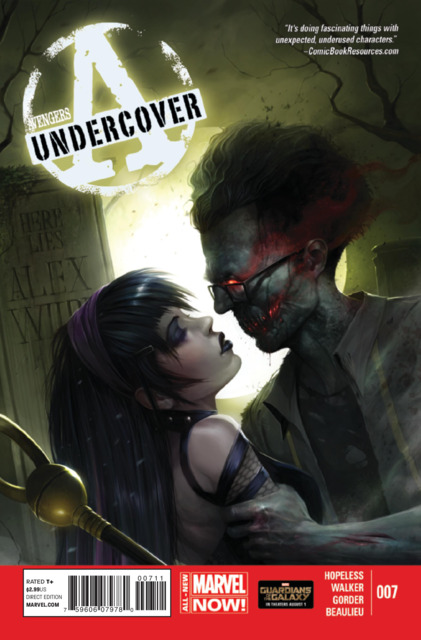