As Ultron attacks at a grand scale, we get a look at what he's really all about.

There is something a fantastic in reading an Avengers story in the OGN format. Having an entire story told without having to worry exactly where it fits in with continuity frees you up to fully dive into the story. With the story starting out "years ago" with an earlier fight against Ultron, we get to see the Avengers (Captain America, Thor, Hank Pym as Yellowjacket, Wasp, Iron Man, Scarlet Witch, Beast, Hawkeye, and Vision) take on the threat. With art by Jerome Opeña and Pepe Larraz, the fight is given a grand feel as we see parts of Manhattan ravaged under his attack. Despite being a bit of a flashback, the battle does get the opportunity to play out, thanks to the size of the volume. If we're to believe and accept the danger Ultron brings, this is a great way to set up the main story while also taking us back to an early (and glorious) incarnation of the team. Rick Remender captures the feel and tone of the earlier days perfectly. They thought they figured out a way to defeat Ultron once and for all but, obviously, that won't be the case. Their actions come back to hit them in a way they didn't imagine.

Cut to the present, we have quite an interesting roster consisting of Captain America (Sam Wilson), Hank Pym, Wasp, Spider-Man, the new Thor, Vision, Scarlet Witch, Quicksilver, and Sabretooth. Before the this battle against an incredibly powerful new and improved version of Ultron, Remender does delve a little into the rights of artificial intelligence. It's a great debate (which we also saw in the AVENGERS A.I. series). This debate leads into what exactly is Ultron really about. Why does he do the things he does. There is a nice look at what makes him, and some of the members of the Avengers, tick. It's not just a story about superheroes smashing robotic enemies. There's some real meat to the story as well.

With this being an original graphic novel and not locked into the current timeline of comics, there is more freedom to let the story unfold in big ways. The fact that we have the new Thor on the team is a good example. It's not often we can just simply enjoy a comic story with the characters we usually follow month to month.

As mentioned, the art is pretty fantastic. You don't really see a contrast as Opeña and Larraz both handle the art. I was also surprised that the colors, which are amazing, was done by three different colorists--Dean White, Rachelle Rosenberg, and Dono Sanchez Almara. You will love the fact that this is OGN-sized since that means we get all this great art and color in one collection.

As much as I try to completely let go of the tether of continuity, there is something big that happens and you can't help but wonder if it will ever be touched upon in the regular books and, if so, when?

It was cool seeing all the different members of the Avengers present. A fight like this would demand we see as many members here as possible. The only downside is some of the members didn't really get a chance to be fleshed out in the story.

We are getting a lot of Ultron and Avengers comics this month and this week with the soon to be released Avengers sequel. It might be too much for some but luckily I read this before everything else.

I have to admit, I'm becoming more and more a fan of the OGN releases from Marvel. It's a great feeling being able to read a complete comic story all contained in one collection. Rick Remender has a powerhouse creative team handling the art and colors and pulls out all the stops with a story jam-packed with Avengers. Without being locked into the continuity of the regular titles, this is a book anyone can dive into and devour. The action builds up to a crazy level and despite seeing a bit of different Ultron stories recently and currently, this one will remind you just why he is an incredibly dangerous foe for the Avengers. Get ready to sit back and enjoy an epic Avengers story. This is what an Original Graphic Novel should be like. 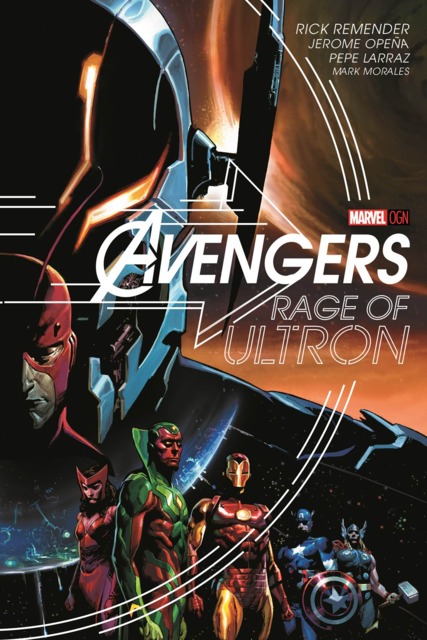