Capt. Marvel’s headaches, both literal and figurative, have returned, worse than ever. Can she get to the bottom of the grand conspiracy before her world crumbles?

Kelly Sue Deconnick has positively EXPLODED onto the comics scene, and one of the things that sets her apart is her willingness, or insistence, on taking established characters that have either been underutilized or even forgotten and giving them a whole new take and, in the case of Carol Danvers, a whole new look. In her solo series, it was revealed that she has an alien brain lesion, partially due to her altered metabolism, that grows and becomes more dangerous the more she flies, thus relegating Carol’s travel options to mundane or sky-cycle. A seemingly small point, but since the Captain in Captain Marvel’s name also represents her air force rank, she’s used to taking to the sky whenever she likes, so being bound to the earth, in addition to providing some levity with her myriad solutions, has real weight and consequence. Things have only gotten worse as a mysterious party, one with deep ties to the Captain's origin, is tormenting her, using the villains of her past to make some kind of twisted point, and the most recent stop is one of the most horrifying: the brood. Deconnick writes Danvers with amazing flair, giving her a voice that conveys her strict, military background but letting her joke and quip enough that her clever mind is never far from the surface and this issue is no different. Her writing head of S.W.O.R.D. Abigail Brand is also something I never knew I missed until it happened, even the brief scene is perfect.

This issue sees her joined by Matteo Buffagni on art, with Jordie Bellaire and Matthew Wilson on colors, and they keep up with the breakneck pace perfectly. Their art has a retro, poppy feel, with some color spots, I’d have sworn this was a flashback issue, but that’s not a bad thing, it suits the tone of a book that stars not only a 70s hero, but features villains that are pure 70s (yes, their first appearance was in 1982, but their style and tone are definitely from the previous decade), so the tone is absolutely spot-on. I’m also a fan of brilliant, almost whimsical, art juxtaposed with violence and a tinge of horror.

Not a great deal happens in this issue. We learn more about the villain tormenting Capt. Marvel, even getting a super villain name, and, of course, his plan further unfurls with the brood, but great deals of it seem to be there to fill pages. We learn some of the whys and hows, but not enough, and the book mostly seems focused on tossing Brood around, but doesn’t seem to have an end in mind. Still, the dynamic art and witty writing mean that, filler though it is, it’s highly entertaining filler.

Captain Marvel has been remade as one of Marvel Comic’s premiere A-listers, and while it may have begun with Brian Reed, Kelly Sue has cemented the character and defined her in ways that she hasn’t been in over forty years. This issue even gives her a plotline that’s all her own, and while it may lag in spots, I still think it’s one of the best on the shelf. The cross-over with Avengers Assemble (which Deconnick has also uplifted of late) is a perfect fit for continuing the storyline, and even stands fairly well on its own. But if you’re a fan of Capt. Carol Danvers, there’s NO reason not to pick this up. 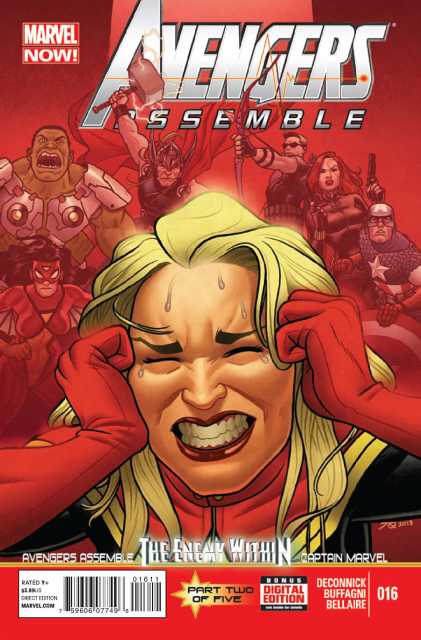