For months we've seen these poor kids fighting each other to the death. Why the heck hasn't anyone noticed they're missing? Christos Gage gives us the answer.

From the beginning, AVENGERS ARENA has been surrounded by a bit of controversy. Consisting of a bunch of young heroes from the Avengers Academy, Runaways and other parts of the Marvel Universe, we've been watching brutal death after brutal death. This all comes from Arcade having kidnapped all the kids and forcing them to fight each other for survival. The controversy comes from the feeling of unnecessary gratuitous killings for the sake of being edgy or shocking.

Call me optimistic, I feel there is clearly more to the story. There have been some deaths that have been a little "too much" or simply hard when it was a character I cared about. Because we're talking "comic book deaths," the deaths may not be what they appear to be.

A big question that hasn't really been asked was how could all these kids be missing for weeks without any of the adults noticing? With several coming from the Avengers Academy, you would think someone would notice and be on the search for them. After all, we are talking about Arcade being the "mastermind" behind all of this. That's where Christos Gage comes in.

Gage is not stranger to some of these characters. The story consists of Hank Pym trying to look into the possibility of missing super-powered children at the request of Molly Hayes. Without giving anything away, Hank embarks on a pretty intensive hunt and we do get some answers. It does make sense and was a nice thing to see.

Depending on how you look at this, this could be seen as a bit of filler in terms of the fighting. This is an important angle that definitely should have been investigated and it's great to see some follow up on it. Partly it felt like it was shown to us after the fact. This could have been a story prepared for from the beginning but it just felt like it was presented at the last minute.

Karl Moline does a good job depicting the numerous characters but there were a couple that looked a little off.

Are people still outraged over this title? In a nice change of pace, we get to see what is happening in the outside world as the kidnapped super-powered children continue their fight to the death. As these kids remain missing, there would have to be adults or fellow teammates wondering what happened to them. Christos Gage returns to tell the story in a fitting fashion since he has written several of them in the pages of AVENGERS ACADEMY. While the story does make sense, it almost felt as if it was a last minute decision to give us this story now rather than show any indication before. It also feels as if it's interrupting the flow the main story a bit. There is still no telling how this story will end. With stories like this one, we can feel assured that there definitely has been some thought put into the overall idea. 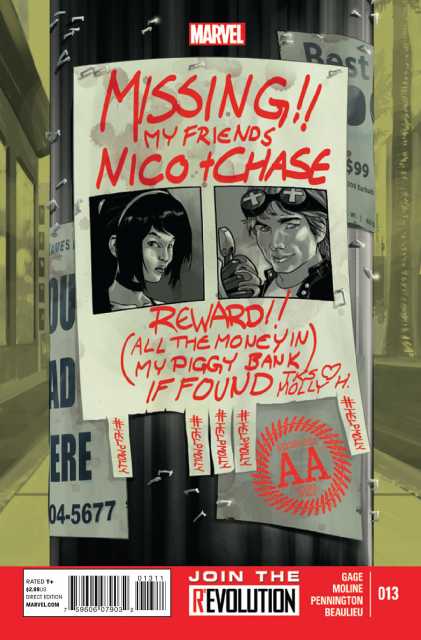