Hank Pym and his team join forces with Cap and Rogue to continue the battle against Dimitrios' attack against all mankind.

A couple issues ago we learned of Victor's fate. This was left hanging as last issue tied in to Inhumanity. Now we pick up with the action underway inside the Diamond, the digital homeworld of artificial intelligence.

We see more of Dimitrios and his plans. It's pretty cool to think of a bunch of A.I. operating in the background of the Marvel Universe without anyone noticing. To give this title more of a connection to the rest of the Marvel Universe, we see Hank talking to Captain America and Rogue (from UNCANNY AVENGERS). This series has felt cut off from the other Avengers titles. That's been good in letting this book go in its own direction but having this connection adds to the credibility of a shared comic universe.

Throughout this series, there's been the question of what rights should artificial intelligence have? They are looking at a new life form but the easy solution is to simply wipe them out. This, as Hank points out, would be genocide. As Cap tries to lay out the government's approach to dealing with the threat, the question comes up as to whether or not Hank is "okay." It's these little facets of the story that are intriguing. Sam Humphries isn't just telling a story about the Avengers versus computers. He's getting into some deep philosophical ideals while also tying into the past history these characters share with each other. Amidst the story, you can't help but smile and love every single panel Doombot appears in.

Andre Lima Araujo gives some great visuals. It's always interesting to see what pops up in the virtual world. You have to hand it to him for drawing so many varied environments.

Thank goodness this series was allowed to continue rather than be rebooted with the other All-New Marvel Now! titles.

This issue falls under the All-New Marvel Now! banner. Unfortunately, it's not the best jumping on point. There is plenty explained in the recap page at the beginning and throughout the dialogue in the issue. Readers would highly benefit from reading the previous issues.

It's still a little weird trying to get used to Doombot not wearing any pants.

I'm torn with the appearance of Cap and Rogue. Hank's team shouldn't need other Avengers members coming in to help out. It makes this team feel...weaker. Hopefully we'll see the team take the lead in defeating this attack.

AVENGERS A.I. continues to be a fun romp through a different corner of the Marvel Universe. We do see some ties to other Avengers books with the appearance of characters from UNCANNY AVENGERS and AVENGERS. Sam Humphries is weaving an intriguing web with the moral debate over the rights to the new artificial intelligence lifeforms. Simply put, if you're looking for a separate Avengers title not tied into a bunch of other books, this is definitely one you should check out. Plus Doombot is the best. 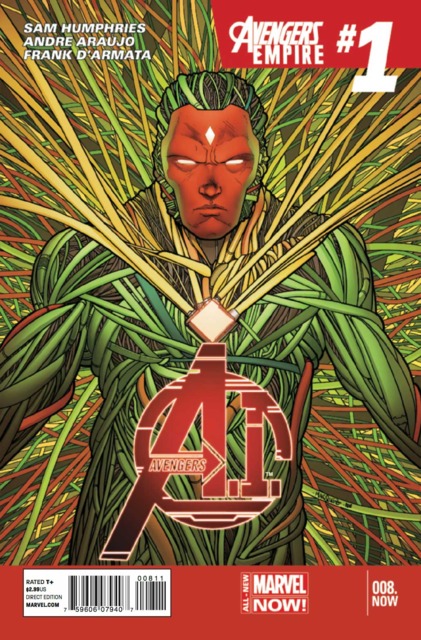