Inhumanity is here so that means the team is helping deal with the fallen city of Attilan in the Hudson River. We also get see Doombot vs Daredevil. You won't want to miss that!

A good and bad thing about this team and series is the isolated feel from the rest of the Marvel Universe. It's good because we've been able to enjoy these characters deal with their own storylines instead of being pulled into the vast INFINITY event. The bad thing is the feeling of being so separated. As a result of INFINITY, the Inhumans' city, Attilan, has fallen into the Hudson River and we're seeing this team try to deal with it and contain whatever strange technology may be present. This puts the team into the Marvel Universe but we still have the original feel of the book present.

It makes sense to have someone like Hank Pym on hand to deal with whatever dangerous items might be recovered. With his worker ants and the ability to shrink things down, he would be a huge asset.

Of course what really jumps out is the battle between Doombot and Daredevil. Doombot continues to be a great character in this cast. He has all of Doom's arrogance but he's forced to be part of this team. Aside from some comic relief, there is a pretty surprising moment with Doombot in this issue. Daredevil was a great choice given Hank Pym's recent appearances in DAREDEVIL.

Andre Lima Araujo's art really makes the books stand apart from other titles. He gives the familiar characters a distinct look and Frank D'Armata's colors make the characters pop off the page.

With this being an INHUMANITY tie in, the story feels like it interrupts the series. There were some developments concerning a missing teammate last issue which is overlooked here in order to deal with Attilan. Sure it makes sense that if a big disaster occurred, they'd jump at trying to help out. And if this tie in brings in more readers, great. But it still interrupts the flow of the series.

It seems Daredevil should have realized Doombot wasn't the real Doctor Doom sooner. Maybe he was too preoccupied to notice right away?

I do really dig Araujo's style but a couple times, characters look a little wider, as if they've gained a little weight. There's nothing really wrong with this but it's a bit of a contrast when we're used to constantly seeing everyone with extreme superhero physiques.

INHUMANITY has hit the Marvel Universe and this team of Avengers is on hand to help out. Sam Humphries handles tying this series into the bigger event well and we get some humorous (and glorious) moments (like Doombot vs Daredevil) as well as a close look at how the average person could be affected by the Terrigen Mists that have been unleashed. This continues to be my favorite Avengers title due to the more intimate feel of the team yet this issue shows they are fully capable of playing with the rest of the Marvel Universe. 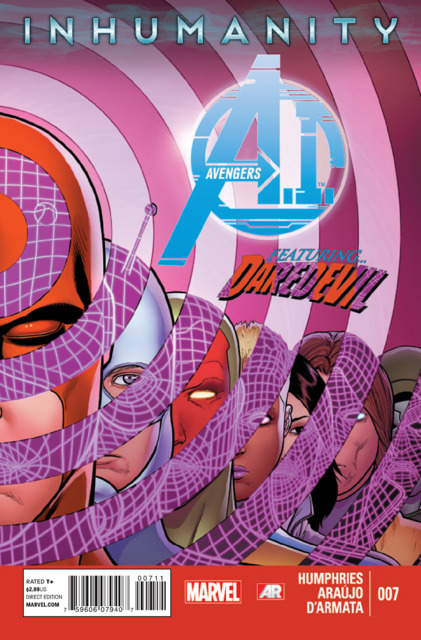