Ah, sit back and enjoy another savory issue of AVENGERS A.I. There's so much to enjoy and it's light on the calories (but heavy on the fun and action).

Have I mentioned how much I dig this series? I have a deep respect for AVENGERS, NEW AVENGERS and SECRET AVENGERS but I love where this book is situated in the Marvel Universe. Sam Humphries is making Hank Pym an interesting character once again. As a follow up to one of the events from AGE OF ULTRON (remember that?), we're seeing Hank involved in some cool things and we're getting all sorts of cool characters on his 'team.'

Aside from this team of Avengers, we're seeing a different side of SHIELD, which is intriguing in itself. There is a secret war going on (not like the ones we had in the past) and the more we see of Maria Hill, the more she makes the perfect director for SHIELD.

For so many robotic characters, we're seeing a lot of emotion. Wait until you see the conversation between Hank and Vision. And of course, how could you not love Doombot?

If you want action, Valerio Schiti delivers a fight scene unlike any you've seen before. Or maybe like several very cool ones. You might not look at Vision the same way after this.

No complaints. This series is such a delight.

Have you been reading AVENGERS A.I.? This is an Avengers title unlike any you've seen before. Humphries is giving us something unique and I just can't look away. I was unsure about some of the character involved but each has their own level of charm and are evolving more and more with each issue. Valerio Schiti's art is great and he really gets to cut loose in this issue. Do yourself a favor and read this series. It's as smooth as butter and spicy enough satisfy your reading desires.

I was hoping Dimitrios would be Ultron. Mainly because he wasn't in Age of Ultron at all really haha

The last page reveal wasn't all that shocking, but it was a very interesting issue. Also FRUIT LOOPS! Yay that Victor isn't dead! And that art is amazing. This is quickly becoming one of my favorite titles.

The reveal was weak for me

I really love the team dynamic on this title, also thank you for printing my letter Sam Humphries! :-D

I liked this issue, and I preferred the art to the usual artist. It's quite a different read than the other Avengers titles, and it's been quite enjoyable so far. I hope it doesn't get cancelled too soon, it's kind of a low seller compared to some of the others.

Can anyone explain the big reveal at the end though? I don't think I got it.

This is, without a doubt, my favorite ongoing right now. Seriously, this series never fails to put a smile on my face. Two of my longtime favorite characters, Hank Pym and Vision, as well as a slew of fantastic new faces, and at only 2.99 a pop! There's no beating Avengers A.I., in my opinion. Here's to a nice, long run filled with excitement, action, and plenty of Doombot!

I'm loving this book. Robots, A.I's, techno speak and funny jokes all together in one book. Schiti's art is great , I need to research him and Humphries writing is hilarious, Doombots "I am not compatible with embracing" made me LoL! I can't wait to see what's next.

this is a pretty fantastic book 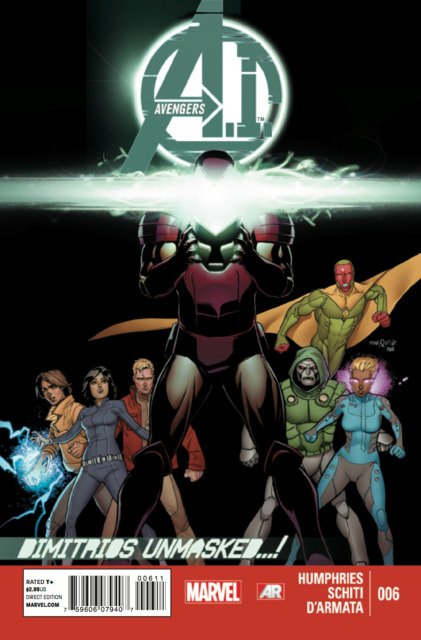