More developments with the rise of the new A.I. and we find out what the role of Hank Pym's team may play in dealing with them.

And now for something completely different. There are times you have to wonder what Sam Humphries is up to with this title. We've been seeing a new batch of artificial intelligence emerge along with the threat they pose. The way SHIELD sees it, they need to be dealt with immediately. Attacks have already occurred and Hank Pym may be the only one to deal with the situation.

Humphries raises the question of what right this new A.I. has. If they are not recognized as having rights, it's clear why they would feel corned and forced to attack first. All of this is leaving Hank sitting on a potential powder keg and whether or not he is the one to keep it defused remains to be seen.

While the threat is being sorted, a member of the team is placed in an interesting situation which will leave readers guessing which side they will choose.

With each issue, I become more and more enamored with André Lima Araújo's art. The distinct style really gives this a unique feeling. Each time I open an issue, I feel like I'm visiting old friends again even though this is only the third issue.

There is a separated feeling from the rest of the Marvel Universe. This is good in many ways but with the nature of the threat and what the A.I. lifeform consists of, this is something that could easily pop up in other titles. This separate feelings allows Humphries to tell his own story but it also makes it feel a little odd considering this series is one of the results from AGE OF ULTRON.

The other question is what happens to this team after they deal with this threat? That is, if they are able to deal with it.

This issue could have used more Doombot!

AVENGERS A.I. continues it's charming nature. Sam Humphries Avengers consisting of characters with artificial intelligence is carving out its own little corner of the Marvel Universe. The threat between the new A.I. and SHIELD is escalating and there is a foreboding feeling that keeps you glued. I enjoy André Lima Araújo's art more with each issue. I have no idea where this series is going and I love it. Being so separate from the rest of the Marvel Universe is a little risky but it allows the characters and Humphries to do their own thing. If you're looking for a different kind of Avengers entrenched in their own adventures, you need to check this out. 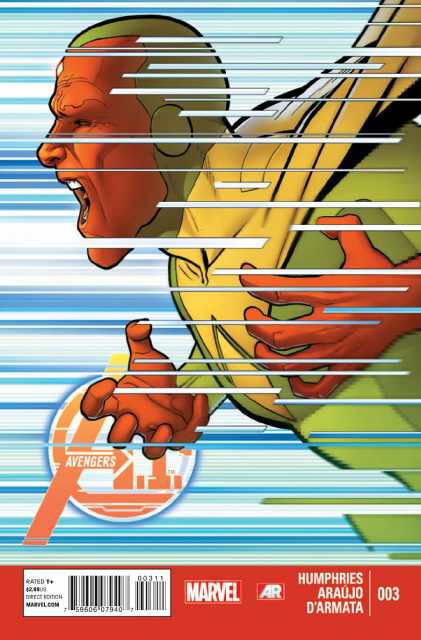