What comes after the AGE OF ULTRON? Why, the Age of A.I., of course. Find out the repercussions of saving the day.

I'll be honest, when I first heard about "Avengers A.I.", I wasn't really sure what to think. In the midst of the AGE OF ULTRON story, I wasn't really sure if it would be something I wanted to get into. Knowing that Sam Humphries would be writing, of course I'd want to check it out. And it's a good thing because I liked this issue. I liked it a lot.

The fascinating thing about the end of AGE OF ULTRON is how it sort of subtly changed things without changing everything. With time travel and all, you never know what the effects would be. We know Hank Pym had to do a bit of tricky maneuvering and this gives a great continuation. I've said it before, I always liked Hank but it's been unfortunate that he got such a bum rap. He's definitely a character that's long been trying to redeem himself.

And let's look at the characters here. Besides Hank, we have Vision, Victor Mancha and also...a Doombot!

This issue was so much fun. No major complaints.

Is this the evolution of the Avengers? Spiraling out of AGE OF ULTRON, we're seeing the after effects of Hank Pym's results to save...everything. With a bunch of A.I. type characters, one who has even had a slight upgrade as well as a freaking Doombot, this series is bound to be nutso. I don't know what Sam Humphries has planned but I cannot wait to find out. The art is pretty solid with a couple minor hiccups. This issue was just a blast to read and it I think this is going to become a new favorite series. 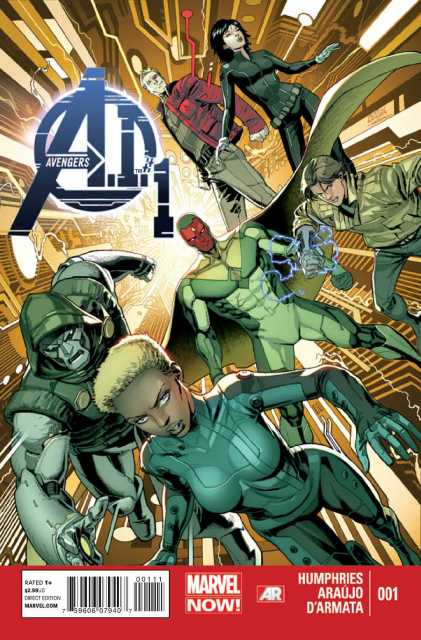