The "Starbrand" may be the least of the Avengers' problems.

Last time we saw the Avengers in Hickman's AVENGERS series they had just met the Starbrand, "a weapon designed to protect a people as they progress through the change period." This new super-powered Starbrand is super charged and can take on nearly any one of the Avengers (as we saw very briefly in the last issue) and that has the potential to be a recipe for disaster.

The start of this series introduced us to some super-powered beings, "world creators" so to speak, that the Avengers allowed to get away. This, at the time, may have been a big mistake on the part of our heroes and that fact becomes more clear in this issue. While the last eight issues have been spending a lot of time introducing readers to characters that will be featured in this series, this issue focuses on the new story-line. Seeds have been planted on Earth, and time will soon tell what these seeds will lead to: what new life will be born on earth and how it will "change everything."

Things get seriously crazy (and creepy) in this issue, and if you have ever seen any of the Aliens movies you will definitely appreciate the bizarre sci-fi elements that are introduced into the plot of this storyline. Hickman uses theories of basic evolution to form his monster and we begin to see what happens when hundreds of simple organisms come together to create one massive sentient being. The result is eerie.

The issue progresses and the Starbrand makes what might lead to one giant mistake: what happens when you "kill the living consciousness of the planet"? This issue is very obviously a prelude to something far bigger, and the final pages of this comic really emphasize that fact. It's almost as if someone is narrating the prologue to a massive story, and that might leave you all the more excited.

We have finally come full circle and the pieces of the puzzle are beginning to fall into place: however, this issue confirms what some readers had complained about following issue three: why did the Avengers just leave those seemingly omnipotent beings unchaperoned on Mars? I get that everyone makes mistakes, but not one of the Avengers stood up and argued against allowing the world creators to continue setting up shop so close to Earth? A flag of some kind should have gone up in someone's head, particularly since the team of Avengers is so large and are supposed to be comprised of some of the greatest minds on the planet. I mean, this is common sense. The fact that not one of them stood up to argue that perhaps leaving those beings unsupervised was a bad idea makes the Avengers look bad and amateurish, and that really isn't good.

Artists Dustin Weaver and Mike Deodato team up to deliver another gorgeous issue of AVENGERS, and although both guys are super talented, I personally preferred seeing Weaver on this title. The panels that focused in on the different "quarantined zones" on earth was really well illustrated. The colors are vibrant and make Weaver's pencils really stand out, and I absolutely adored that. One thing is certain, this is a very pretty comic book.

One of the problems with this issue was the big mistake made on the part of the Avengers team. It's hard to believe with all those great minds not one of them felt it was a bad idea that the omnipotent beings were so close to Earth and could lead to being a possible threat. At least one of these characters should have begged the question. The other issue is the fact that these characters are still focused on the smaller scale of the problem: we spent a lot of time in this issue containing the Starbrand when there seem to be far greater issues at hand to be concerned with.

Things have been moving very gradually, and in this case I think that is a good thing. Hickman is clearly setting up a bigger story and he is taking his time: that's half the beauty of this series. This issue definitely felt like the prelude to something much bigger, especially the last three pages of the issue. I am definitely excited to see what happens next. 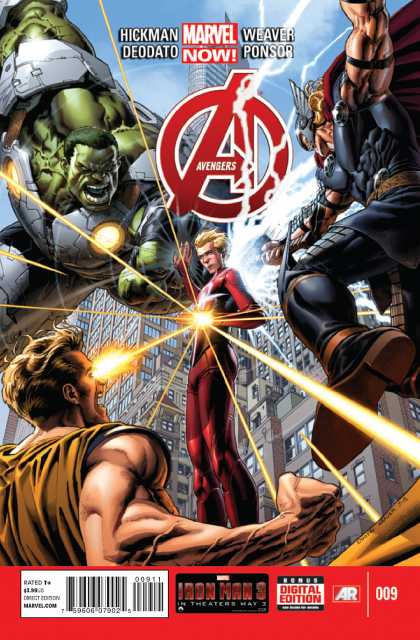