INFINITY is over so it's time for the Avengers to party, right. Too bad there's a giant threat headed towards Earth.

To make things even bigger, we start off a thousand years in the future. Glimpses into the future always guarantees a crazy good time and it starts off a chain of events that will hopefully be further explored later. There's a big problem for the team to handle. This is another example of the benefit of having such a diverse roster - the members needed for the job are at hand.

There's a lot of impressive art here. Not only do we get Esad Ribic, we also see some art from Mike Deodato, Salvador Larroca and Butch Guice. What bridges it all together is the strong and consistent colors by Dean White, Frank Martin, Paul Mounts and Laura Martin. Normally I cringe at the idea of a vast creative team on the same issue but it works here as you find yourself focused on the story.

Future stories are always cool but we've seen so many now. It gets hard to keep track of them all. Not a lot is explained in the reasoning or motives of the future characters so we'll have to wait to see what comes from all of this. Hopefully we'll find out more behind the idea of the Rogue Planet.

All the Avengers together and relaxing at a barbecue at the Avengers Tower is fun but it's a little weird seeing them all in costume. Sure, some have secret identities but it feels less like they're a team when they can't trust each other or feel comfortable enough to dress more casually.

This is supposed to be a jumping on point but new readers might be wondering who some of the team members are.

Even when the Avengers are relaxing after a big event, you can count on the action to kick in. We see what the team does next and what Captain America and Iron Man think about the team's roster as well as where they'll go next. This might be a new jumping on point but you'll still want to know who all the characters are in order to fully appreciate all the interaction between them. There are a lot of great artists in this issue and it doesn't come across as cluttered or disjointed. You will get a sense of the big scope that Jonathan Hickman has been carving out with the Avengers. It's a great time to be an Avengers fan. 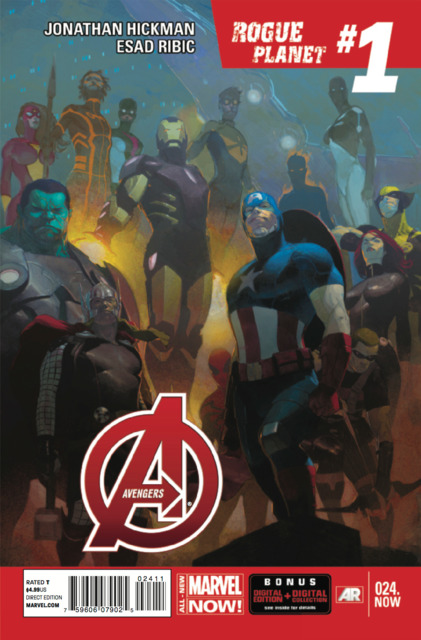