Infinity continues as the entire universe assembles its fleets against the Builders. But are they even capable of being stopped?

Jonathan Hickman is leading the charge on Marvel’s latest event, and calling him the tip of the spear is inaccurate as he’s the architect behind all three of the main titles, even if he doesn’t wind up writing all of them. This issue of Avengers is not just a tie-in, it is integral to the entire tale, which is why it is great news that it’s also incredible. The Builders, beings that are cosmic beyond telling, are obliterating entire worlds across the galaxy, and it’s time for the major empires to put aside their differences and unite. Sure, it sounds pedestrian on its face, but this time they’re going to places they never dared before: the Shi’ar can’t just pretend this doesn’t affect them, the Brood have to be considered as shock troopers and even the Annihilation Wave in the Negative Zone must be mentioned as allies. This one truly is for all the marbles and Jonathan Hickman has eschewed much of his grandstanding philosophizing (which certainly has its time and place and has been excellent in previous issues) for good, old-fashioned military tactics and planning. This issue also focuses on the Skrulls, who are at an all-time low after a combination of the Annihilation Wave and their failed Secret Invasion bringing their empire to new depths, but by focusing on their fascinating warrior culture, the characters become compelling, and even heroic under their new leadership, all over again.

Leinil Yu takes over pencils from Stefano Caselli, and if ever there was a balm for that particular loss, it is he. Yu’s razor sharp linework, highlighted and contained by Gerry Alanguilan’s incredible inks and brought to life by Sunny Gho’s moody, crisp colors, are an excellent match for Hickman’s hopeful yet grim, sci-fi tone. The colors in this book truly are a treat with shining vessels and beams, massive explosions and the gorgeous backdrop of space. The action is spread throughout the book and it’s all fantastically paced where even the speeches and marshaling of forces are thrilling and moving. Which makes what happens at issue’s end all the more heartbreaking and shattering. I truly cannot wait for the next issue of Infinity OR New Avengers.

There’s very little to dislike in this book. It does pick up directly after Infinity, so if you’re just a fan of this title and don’t care about the event, you’re out of luck, but since both are being written by Hickman, I have a hard time imagining who that would apply to. If it’s a budgetary concern, however, that could be problematic. Two of pages are title pages, and while they’re lovely and ornamental, they’re extremely light on content.

This book doesn’t seem to be a tie-in as much as a continuation and a critical part of the event. This is an interesting tact to take as it essentially turns a 6-part story into a 16-part one, but we’ll see how necessary it is for Infinity #2 (or New Avengers #9). Marvel’s even included a very simple chart in the back of this issue explaining where the tie-ins and off-shot issues land in the continuity. It’s a lot simpler than it sounds, trust me, there are only three main titles. Regardless, this issue does stand fairly well on it’s own, but as a continuation, it’s spectacular. It’s good to see the Skrulls again, Kl’rt in particular, and seeing them try to elevate themselves is actually very moving, but this book is definitely about bombast and action and it accomplishes it beautifully. 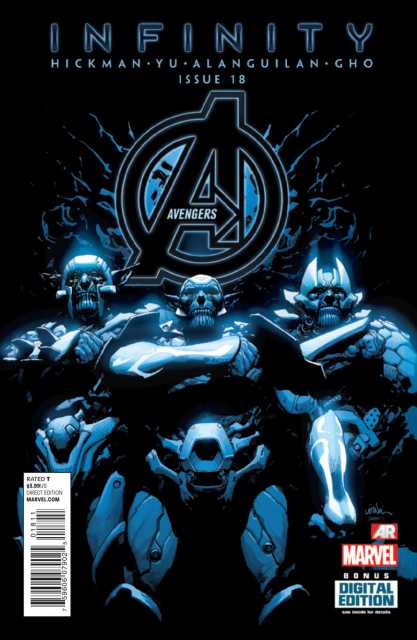