The Avengers go undercover in an issue that is full of fun from start to finish.

This month THE AVENGERS takes a serious turn in terms of style and even genre going from intergalactic adventure to something of an under cover spy story. Either way, it's clear that Hickman is showing off and demonstrating to readers that he doesn't only write good sci-fi, he can write other genres very well, too. The story opens with the Avengers team having resolved to infiltrate A.I.M. under cover. The team masks their identities and don their best clothes as they head to Macau to get in on a bidding of A.I.M.'s "next generation bioweapons."

Shang-Chi really makes quite the entrance at the very start of the issue and you really get the sense that you are reading something out of a Kung-Fu flick from the 1970's. If that doesn't strike you as remotely entertaining well, then, you are definitely missing out. I loved the sense of action and adventure you get right from the start of this issue, and Shang -Chi is really well represented here and given some of the issue's best lines. I am glad he's been given a little bit of spotlight in this issue because he is one character we generally do not see a whole lot of. His character is presented very well here and if you are a fan of martial artists, chances are you will enjoy his appearance. Natasha also has a really hilarious scene in this issue that is captures perfectly by Mike Deodato's art. The moment is guaranteed to make you at least chuckle as she and Spider Woman go back and forth debating Natasha's proposed solution to the Avengers' problem.

The issue is all about fun, and Hickman shows us that he definitely has a fantastic sense of humor. One of the best scenes in this issue has to be when the Avengers team up with A.I.M. and the two groups throw one big party in their hotel room. The dialogue is incredibly entertaining and Hickman uses the fact that these are Avengers to his advantage. Their identities is something that actually makes the story seem a whole lot more interesting and it was a moment that was definitely fun to read.

One of the things I found to be slightly off was the fact that several of the Avengers that went "undercover" are characters who are actually open with their identities. It is, I think, public knowledge (at least in her series) that Captain Marvel, for example, is Carol Danvers. The fact that these are Avengers and that one of their objectives on this particular mission happens to be to "infiltrate the A.I.M. Agents and win their trust" is rather hard to believe. Having said all that, it's somewhat easy to suspend ones' disbelief in order to enjoy the story.

It's hard to say who steals the show in this issue because so many of these characters are well presented here. There is some really fantastic dialogue in this comic that will keep you laughing from the start of the issue to the finish, and beneath the laughs and the fun, is also an interesting story.

I admit, I struggled with the rating for this comic a little bit because it really felt like it fell between a four and a five star rating. Sure, the fact that readers had to suspend their disbelief to really fully enjoy this issue was a little bit of a problem., but the fact that we're given such entertaining dialogue, great layouts, solid pacing and some nice art by Mike Deodato makes picking up this issue this week a no-brainer. This is a big change from what we have been reading in THE AVENGERS thus far but it surely won't disappoint fans of these characters and of this series. Overall this was a nice change of pace and it feels like a good place to start reading if you have yet to check out this series. 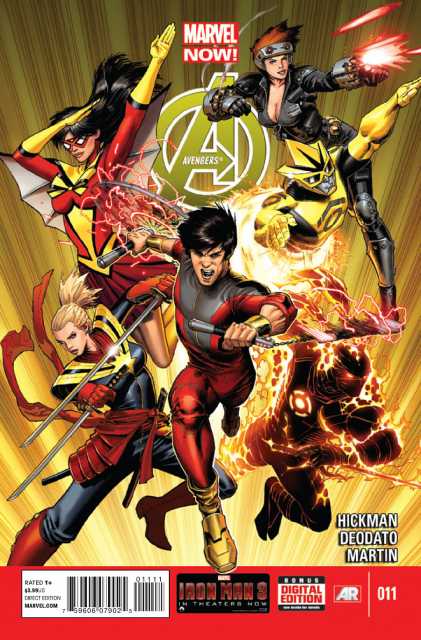