Ash and The Army of Darkness #1

Ash is back. Steve Niles and Dennis Calero pick up where the movie left off to continue Ash's story with the Army of Darkness.

Adapting Ash and the Evil Dead/Army of Darkness characters can be tricky. We've seen many attempts and after a while, it started to get to be too much. Steve Niles and Dennis Calero go back to the basics. Picking up where Army of Darkness.

In case there's still one or two people unfamiliar with the backstory, Niles gives a great and simple recap, all on the first page. It's not soon after that the action kicks in and doesn't hold back.

Dennis Calero's art style adds the right vibe for the story. Calero captures the look of Ash and combined with the dialogue, you feel yourself getting pulled into the comic world with each page.

As for the plot of the story, it makes sense and Niles seamlessly sets it all up in order to get Ash back into another wacky predicament.

When the action kicks in, there are some around Ash and they seem pretty calm considering there's all sorts of...stuff hitting the fan. We wouldn't necessarily want page after page of supporting characters freaking out but the complete lack of reaction is a bit of a stretch.

There was a couple moments some of the characters or victims' faces were lacking some detail.

For a first issue, the story is quickly set up with the potential for plenty of Ash-style action. Many of the past Ash/Army of Darkness stories lacked a little heart. Steve Niles and Dennis Calero bring the franchise back to its roots. Picking up right at the end of Army of Darkness, the story simply feels like it could be the actual continuation. Calero's art captures some of Bruce Campbell's facial expressions and the colors adds an eerie touch. With a new threat and another dangerous situation, it's going to be a fun ride to see Ash gets himself out of this mess. 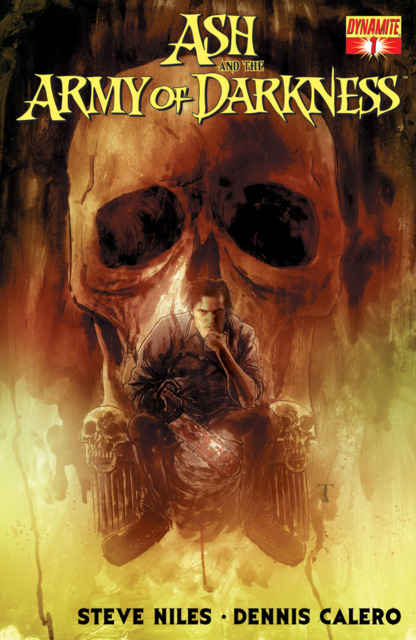